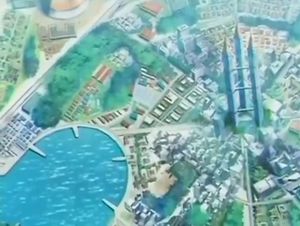 Earth (地球, Chikyū?) is the home planet of the humans. Unlike most Bakugan civilizations, Earth has no unified government, and instead has many different countries.

Technology on Earth varies. Though not as advanced as the Vestals, Gundalians, or Neathians, humans do have the capability to make Dimensional Transporters. Likewise, humanity spawned Bakugan Interspace, an artificial virtual reality. However, unlike the Gundalians and Vestals, humans do not have space-faring fleets.

Earth is the planet where the Bakugan and Cards initially landed after Naga stole the Silent Core. Earth was also one of three known sites that received the Battle Gear data from Fabia Sheen's distress call, which led to the first synthetic Bakugan.

Out of all the four seasons of Bakugan, most of the battles occur on Earth; however, the least amount of battles occurred on Earth in Bakugan: New Vestroia, whereas in the first series, Bakugan Battle Brawlers, nearly all of the battles are fought on Earth. Zenoheld tried to destroy Earth with the Alternative Weapon System (it could be either that Zenoheld hates humans as well).

In the last series, Bakugan: Mechtanium Surge, most of the storyline is occurring on Earth but the settings for most of the battles are now both divided between Earth and New Vestroia because of Dan and Drago training there.