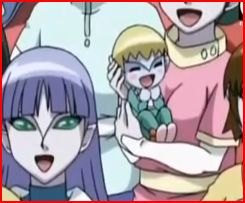 They have a shapeshifting ability similar to that of the Gundalians'; however, the Neathians appear to be better at shapeshifting, since Fabia's disguised appearance looks completely human while the disguised Gundalians look slightly different from humans. However, the eyes of female Neathians look like a robot's in their transformations.

In their real forms, still humanoid, Neathians have rounded, blue diamond-shaped 'bug-eyes' and their skin color differs from gender, males have a light blue skin, while female Neathians have light pink skin. Slightly resembling humans, the upper part of their faces also have a triangular arc. According to Ren, the Neathians are known for their close-combat skills. Fabia's strength proves Ren's claim to be true. Despite this, they are very inexperienced when it comes to war, due to their protection the Sacred Orb gives them, making the Neathian-Gundalian War a difficult problem until the Brawlers came.

After the war ended, it appears that Neathia and Gundalian have sorted out their differences and become close friends. This is obviously with Paige and Rafe who seem to be good friends.

Like the Vestals' former government, Neathian government is ruled by a single monarchy, currently led by Queen Fabia.

Many people in Neathia use Haos Bakugan.