Fabia Sheen (ファビア・シーン, Fabia Shīn?), now known as Queen Fabia, is the former Princess of Neathia and was the Haos Brawler for the Battle Brawlers in Bakugan: Gundalian Invaders. In Bakugan: Mechtanium Surge, she has become the current Queen after her older sister Serena Sheen stepped down to become Neathia's Ambassador.

﻿Her outfit in Gundalian Invaders, as a human girl, is a white and orange robe with a yellow, orange and white robe with rings and white and blue boots (Similar to Runo's New Vestroia outfit). She also has pink earrings. She has blue hair and green eyes. Her outfit in Mechtanium Surge is similar to the robes her sister wore during her time as Queen.

As a Neathian, she looks like her sister and her skin is a shade of purple and has big green round eyes.

She is the younger sister of Serena Sheen, the former Neathian Queen. Fabia's reason for brawling is to save her planet from the Gundalians. She was also the fiancée of the former Captain of the Castle Knights, Jin, who is deceased. Aranaut, Jin's Bakugan, then becomes hers.

She seems to have the same kind of love for freedom and initiative to act as Mira does. She has considerable physical strength, throwing Dan over her shoulder twice in episode 3 and once in episode 10, when Zenet tried to take her hostage. Those incidents may prove Ren Krawler's statement about the Neathians' specialty at close combat, although most of what Ren said was a lie to put down the Neathians.

Fabia is a grateful Neathian, she loved her late fiancé, Jin. After his death at the hands of Kazarina, she disobeyed her sister Serena and goes to Gundalia to rescue Aranaut.

Since then, she developed a hate toward Gundalians, however, she eventually trusted and befriended Ren Krawler, his team and Nurzak after she realized they were all betrayed by Barodius. She also sympathized with Lumagrowl once Kazarina suffered the same fate as her late fiancé. 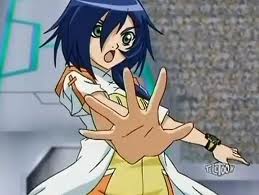 She first appeared in The Visitor and brawled Koji Beetle using Jetro and won. She later brawled Dan Kuso with Aranaut, Fangoid, and Merlix, but lost. After losing, Dan gloated about his win, telling her that she shouldn't use the Bakugan for war, and that hostile forces like her were not welcome in Bakugan Interspace. Because of that, she decides to throw him and leaves, telling Dan that he didn't know anything. Later, Shun Kazami finds her and asks to hear her story.

Fabia and Shun appeared Exposed to fight Jesse Glenn and his Plitheon, interrupting Dan's battle. Fabia then tells Dan that Ren is an imposter. Aranaut gets the upper hand and would have won the battle if Ren and Jesse hadn't cheated. Aranaut then falls through the data, which was caused by Ren, and Fabia quickly loses the battle after that. When she loses, Fabia begins to cry, which angers Dan and causes him to yell at Jesse. Soon after the battle Fabia and Shun expose Ren as the enemy. Dan and Jake believe them, but Marucho isn't convinced. Ren then tries to lie that Jesse is a Neathian, but there was nothing he could do except run from the arena, denying everything. Marucho chases after him, in denial that his new friend is the enemy, leaving the other Brawlers behind.

She becomes an official member of the Battle Brawlers and replaces the digital, Akwimos, Hawktor, and Coredem with their real counterparts from Neathia. Later, she went looking for Ren until he took control of Bakugan Interspace and used the system to force her and the brawlers out of Bakugan Interspace. She appeared to have doubts about the brawlers believing her so easily after Ren deceived them, but Dan disclaimed her doubts.

In Escape From Darkness, Fabia battles Zenet and Lena with Marucho's avatar to distract them, while the real Marucho went to hack Bakugan Interspace. After she loses, Zenet and Lena try to take her hostage to give them more leverage against the Neathians. Aranaut is unable to teleport her out because he used up most of his energy in the battle. Fabia then throws Zenet when the Gundalian attempts to take her hostage, and soon after Marucho arrives and teleports them out of Bakugan Interspace.

In The Element, after hearing that The Element is with the Gundalians, she was worried that Neathia is in big trouble. Because of Linus' Neathian form, it could be that Fabia also has a Neathian form and is simply disguised as a human to blend in. She explains to the brawlers that the Element is the 'ancient life force of Neathia' which she said that it can turn a driest desert to a fertile farmland. In fact, It was really important to get it back for Neathia.

In The Sacred Orb, Fabia takes the brawlers to Neathia, where they meet Queen Serena, her sister and the reigning queen, and tells the brawlers that the Gundalians want the Sacred Orb from the Neathians to rule the Universe. She also makes them members of the Castle Knights, the elite soldiers of the Neathian Guard. Fabia takes Dan and Shun to the second shield generator due to her vast knowledge of the forest that surrounds it, while Jake and Marucho go to the other shield generator.

In The Secret Switch, while heading to the shield generator, Fabia brawls against Stoica and Jesse with Dan, although Dan does not join the battle until the last round, in which he used Hawktor. Before brawling, Fabia told Dan and Shun that they would use their second distraction plan, in which Dan and Shun traded Bakugan. Their plot worked, and Stoica didn't realize the switch until they were almost defeated.

In Curtain Call, After a fight breaks out between Dan and Jake, Fabia goes after Jake when he wants to fight the Gundalians instead of rebuilding the battlements. Before they can head back, Jesse and Ren appeared and challenged them to a brawl. She and Jake accept and they defeat the Gundalians.

In The Secret of the Orb, Fabia and Marucho go to investigate the Gundalian ships scouting out the second shield. Later, they come across Nurzak and Ren and are challenged to a brawl. However, before the battle was over, the Sacred Orb sent out a dimensional twister and Fabia thought the Sacred Orb was angry until Nurzak said it was a warning. He and Ren withdraw and the twister dies out. She is last seen back at the Palace when Dan suggests the battle caused it to be angry while Fabia says they have been fighting the Gundalians for months and this had never happened before.

In Colossus Dharak, she faces off against Kazarina, and the battle lasts until the next episode when she is defeated. At the end of the episode when she finds out that Ren rejoined the Brawlers, she is distrustful of him. 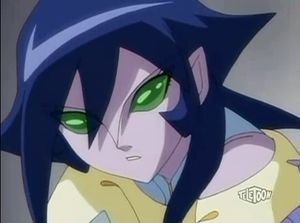 Fabia in her true form

In Forgiveness, although the boys have accepted Ren, Fabia has not, so she challenged Ren to a fight to see if he really has changed, or if he is just continuing his ruse. She won, but realized he was telling the truth, and allowed him into the Castle Knights. During this episode, it is revealed that she had a fiancé, Jin, who was Aranaut's original partner. However, Jin was killed by Kazarina in a battle and she took Aranaut back to Gundalia. Meanwhile, Fabia snuck on to Gundalia and rescued him, and the two became partners. However, Aranaut lost his memory of the incident due to Kazarina's experiments and believes he has always been Fabia's partner.

In Genesis, when Dan returned with Nurzak and Mason, Fabia doesn't harbor outright hostility towards them, instead giving them the benefit of the doubt. It was also revealed that she went to Gundalia against her sister's orders not to leave, revealing a bit of a rebellious side of her personality.

Upon reaching Gundalia, she decides to tag along with Ren, Mason, and Nurzak as they rescue Lena, Jesse, and Zenet. She still does not completely trust them, but is willing to give them a chance.

In Redemption, the group splits up into Ren and Mason and Fabia and Nurzak. She goes with Nurzak as they attack Kazarina's lab. However, Kazarina and Stoica ambush them before they get there.

A battle quickly ensues, but Nurzak plans for them to escape by faking their deaths. Nurzak tells Fabia a story about his friend who craved action so much that he led a group of soldiers, including the friend's daughter, into a battle in which they were unprepared for, resulting in the daughter's death. The friend learned a harsh lesson that day and Nurzak reveals he only told this story because Fabia reminded him of his friend's daughter. Stoica and Kazarina discover their trick and the battle resumes. After Kazarina reveals she has hypnotized Ren's teammates, Stoica begins flooding the arena, forcing her, Lena, Jesse and Zenet to retreat. Fabia is nearly carried away by the water, but Nurzak manages to get her and Aranaut safely, but he himself is carried away and Sabator chases after him. Aranaut gets Fabia to safety while he looks for any signs of Nurzak and Sabator, but he is unsuccessful. Fabia asks Aranaut if the story Nurzak told was really about himself to which Aranaut replies when someone is trying to teach a lesson using a painful memory, it is easier to pretend that the memory is somebody else's. At this point, Ren and Mason come across her as they mourn over Nurzak.

In Broken Spell, after seeing Lumagrowl walk away, she can't help but feel sorry for him because he lost his partner.

In Code Eve, she, Nurzak, and Mason make it to Nurzak's ship in order to get back to Neathia. They get back and join the battle.

In Destiny Revealed, she says goodbye to the Brawlers, even though she is sad doing so, and has Aranaut transport them home. 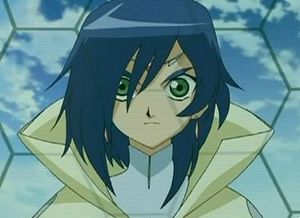 In A Royale Pain, Paige commented that Fabia sent her and Rafe to Earth to help the Brawlers out with the Mechtogan.

In Back In Sync, while Marucho reviews his life as a Brawler and looks through old photos of friends, Fabia can be seen in a photo with Jake Vallory and Ren Krawler on Neathia in their Castle Knight uniforms.

In Gundalia Under Fire, she is also revealed to have become the Queen of Neathia after her sister abdicated the throne to become the Ambassador of Neathia. She appears briefly conversing with Nurzak, Ren, and the Brawlers discussing what to do about the invading Chaos Bakugan. She decides to send the Neathian army as reinforcements to Gundalia.

In True Colours, she is glad alongside Nurzak when Mag Mel is finally defeated.

She made a non-speaking cameo in The Final Takedown, looking at the light left across Earth, New Vestroia, Vestal, Neathia, and Gundalia by the Dark Moon.

In Bakugan Dimensions, Fabia can be found in the Neathian Palace.

(Before brawling)
"There's more going on than you know."

(After winning)
"If you work hard, maybe one day you'll be what I'm looking for."

Now that Fabia is the Queen of Neathia, she has given Aranaut to the Commander of the Neathian Forces, Captain Elright.

Fabia at first didn't seem to be very good, due to losing a majority of her battles. However she improved and became a skilled battler but not a brilliant one. From her record she won 25-37.5-50% of her total battles.