Jake Vallory (ジェイク・ヴァレリ, Jeiku Vareri?) was a character in Bakugan: Gundalian Invaders. He became a new friend of Dan when Dan arrived at Bayview. He was a Subterra Brawler and used Coredem as his Guardian Bakugan and Rock Hammer as his Battle Gear. He is voiced by Dan Petronijevic, the same voice actor for Julio Santana, Spectra Phantom, and Marduk.

Jake is big hearted and very brave, he is sometimes headstrong, often using brawn instead of brain, and sometimes is a little scared when shown the elements of Bakugan. He has a great admiration of Dan to which he gives him the nickname "Dan the Man" ("Aniki" in the Japanese version), occasionally implementing rhymes as well, something that displeases Dan.

He first meets Dan when he moves to Bayview. Jake goes to Dan's high school and plays football.

In A New Beginning, Jake goes with Dan to Bakugan Interspace for the first time. Here he meets Marucho, who offers Jake Haos Aranaut or Subterra Coredem as his first Bakugan. He chooses Coredem, but discovers it is a synthetic Bakugan and cannot talk, much to his disappointment. He stares sadly at Drago, who replies, "Quit staring at me like that. It's creepy." He later meets Ren and goes to watch Shun's battle with the Brawlers. Ren then informs Jake that he's scheduled his battle against Dan, while it turns out the battle was Dan against Ren himself. Jake then watches the rest of the battle with Marucho and Shun. 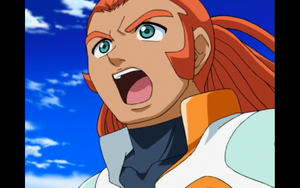 Jake in his Castle Knight uniform

In Revelation, it is revealed that Julie Makimoto is one of the cheerleaders for his American Football team. He later watches the battle between Dan and Marucho against Sid Arkale and Lena Isis.

In Brawler To Be, Jake battled Dan for a practice and lost. He and the others later saw Mason Brown battle a random kid and win. Dan then decided to battle him and everyone cheered. But when Jake wanted to battle to show that he is a real Battle Brawler, everyone booed because they wanted Dan to brawl Mason. He was defeated by Mason's Avior. Julie offered to give advice to Jake at the football field. Thanks to Julie, he and Coredem were able to defeat Mason and Avior in a rematch.

In Hostile Takeover, Jake is finally partnered with the real Subterra Coredem, something that made him very happy due to his long desire to have a talking Bakugan.

In Twin Attack, Jake and Dan volunteered to go into Bakugan Interspace to do inspection on the Gundalians and Dan challenged Ren for a battle but instead, the two went a brawl against two hypnotized twin brothers and took the victory.

In The Sacred Orb, he was awarded the position of a Neathian Castle Knight after battling Nurzak and Sabator.

He battled Airzel and Mason with Marucho in Decoy Unit, and fled the scene after Marucho freezes the Gundalians' Bakugan, distracting them.

In Curtain Call, he runs off into the Neathian jungle after getting into an argument with Dan. Soon afterward he is found by Fabia, who convinces him to return to the main town but before they can Jesse and Ren challenge them to battle. After harshly losing to Jesse in the first round he and Fabia end up defeating them in the next two, ensuring their victory and allowing them to head back to the Neathian Capital.

In Colossus Dharak, he helped Marucho fight off Stoica, but Gill attacked him and he ended up fighting Gill instead.

In Into the Storm, he tried to find a human boy named Robin who had supposedly escaped the Gundalians and was looking for his sister. However, Robin was just another child brainwashed by the Gundalians and it was all a trap to capture and brainwash Jake. Kazarina defeated him and took him back to Gundalia with her. Before that, he said that he failed Dan and his friends after he ignores Dan's orders and discussions with him. 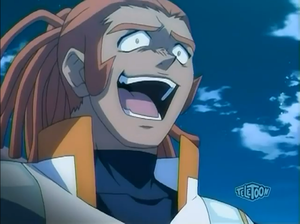 In Jake Returns he's taken to the Gundalian's lab and is hypnotized by Kazarina, who sends him back to Neathia to plant a virus in the third shield. However, Dan set a trap for him when he realized that Jake was acting suspiciously. He set a secret teleporter pad that sent him into the middle of nowhere and the two battled. Using a powerful Ability Card that doubles Coredem's power level, he nearly beat Dan until Shun stepped in and the two defeated him. However, he was still brainwashed by Kazarina and taken back to Gundalia again. He might have been thought to be the new Subterra brawler for the Twelve Orders. Under the hypnotism in addition to his eyes changed and also displays a wide, ghoulish grin in most situations.

In True Evolution, he made an appearance in the end being summoned by Emperor Barodius due to Dan asking for Jake. He said that Gundalia is his brand new home.

In Redemption, he tackled Dan and locked him in jail to be hypnotized by Kazarina.

In Jake's Last Stand, he was at a briefing with Gundalian soldiers on how to defeat the brawlers. He later battled Marucho, utilized Rock Hammer and ended the battle with a tie. He disappeared when the foundation of the building started to collapse.

In Final Strike, Kazarina offered Jake to vaporize Dan, but he couldn't bring himself to do it, so Kazarina would do it.

In Dream Escape, he and Coredem snapped out of Kazarina's hypnosis and he rescued Dan because he cannot make himself to vaporize Dan.

In Broken Spell, he battles Lena until Kazarina's death snaps her out of hypnosis. After the minor twelve orders join the Castle Knights, they all get ready to brawl Phantom Dharak.

In Destiny Revealed, he is healed by Linehalt's forbidden power and later says goodbye to Coredem, the Neathians, and the Gundalians, before Aranaut teleports him, Dan, Shun, and Marucho back to Earth. He gets extremely emotional when saying goodbye to Coredem, even crying hysterically. 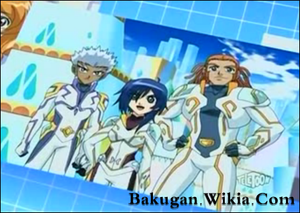 After separating from Coredem, Jake decided to retire from Bakugan and is no longer with the Battle Brawlers at the start of Mechtanium Surge. He makes a single cameo in Back In Sync, in a photo with Fabia and Ren when Marucho was reflecting on the good old days of the Battle Brawlers.

Jake was an amateur brawler. He used to only want to battle the way Dan battles which proved to be pointless and a disaster. Thanks to Julie's help, Jake found his own style of battling which works for him. Although not the best, he can still hold his own in battle. Most of his battles have been losses though.