Jesse Glenn (Japanese version: Ethan Glenn (エイザン・グリン, Eizan Gurin?)) is a major character in Bakugan: Gundalian Invaders. He is a Gundalian Ventus brawler and one of the Twelve Orders. He is partnered with Plitheon. Originally loyal to Emperor Barodius, he served as a member of the Gundalian Agents that were sent to infiltrate Bakugan Interspace.

Jesse is a Gundalian actor and poet, he shown to be close his Bakugan partner Plitheon. He loves to read books and often speaks in prose.

He was originally loyal to Barodius. Once he was freed from Kazarina's hypnosis, he learns that Barodius turned his back on him and his two teammates Lena Isis and Zenet Surrow and betrays him.

He has a friendship with Ren Krawler and Mason Brown.

When he saw Nurzak and Mason alive, he mistakenly thought they were brought back from the dead. 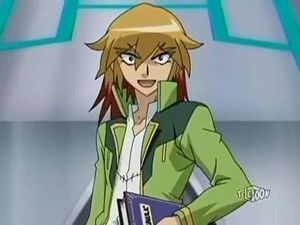 Jesse disguised as a human

Jesse first appears battling children, kidnapping them, and bringing them back to Gundalia.[1]

He brawls against Fabia Sheen. He was supposed to battle Dan Kuso, but Fabia intervenes and brawls in Dan's place. Fabia was about to win until an error in the arena that Ren created (intended for Dan and Drago) affected Fabia and Aranaut, costing her the win. After Ren was revealed to be the enemy, Jesse left, but even after that, Ren still called Jesse a Neathian.[2]

He battled alongside Ren, against Shun and Linus. He is strong showing that he defeated Linus and Shun all by himself.[3] 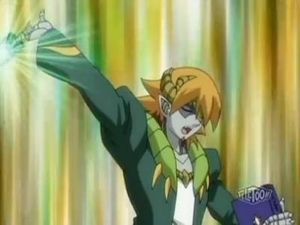 He feared that he would also suffer Lena's fate, which was confirmed as correct that Stoica and Kazarina wanted to blame him for the failure at the second shield, so he ran away in the middle of the night. He was found by Ren, who told him they might be able to redeem themselves if they beat some of the brawlers, so he tag battles with Ren against Fabia and Jake, but loses. He is taken back by Ren where it is shown that Plitheon has always was annoyed by Jesse. He later gets warped away by disappearing; his last words were, "The spotlight has shifted to you, Ren," and disappears in a light. Ren looked away when Jesse disappeared.[5]

Sid, Lena, Jesse, and Zenet were shown to not be dead but trapped in Kazarina's Lab. Sid was the only one to escape.[6]

He along with Lena and Zenet were hypnotized by Kazarina.[7]

He was seen battling against Neathians alongside Lena and Zenet.[9]

He battles Ren until Kazarina's death snaps him out of hypnosis. He later joins the Castle Knights in the upcoming battle against Barodius and Phantom Dharak.[10]

He was easily defeated by Phantom Dharak when trying to attack Barodius along with the others.[11]

He later leaves with Ren, Lena, Mason, Zenet, and Nurzak and they all head back to Gundalia.[12]

During the Chaos Army's attack on Gundalia, Jesse and Plitheon are seen in an image, defending against the invaders.[13]

Jesse has an impressive record, he actually was pretty strong considering he won 56% of his brawls. He also is the only member Minor Twelve Orders to never lose a brawl on Earth. He also managed to beat Shun, who was ranked second in Interspace.