He has a split personality, one of an angel, the other of the devil. When he's an angel he is fun to be around, but when he is in devil mode, he is frighteningly cruel and no one can stop him. Stoica has lots of trick moves during battle and opponents have a hard time reading him. He has saved Gundalia many times with ingenious battling abilities. He is the youngest member of the Twelve Orders. It is unknown why, but somehow he was able to breathe underwater as shown in episode 14, when he was easily beating Marucho.

It is said that Stoica has a split personality: as an angel, he is fun to be around, but as a devil, he is frighteningly cruel. He is loyal to Barodius, though it is unknown whether that loyalty is more for his own gain or if it is genuine devotion. Either way, he was always suspicious of Gill, and figured out Airzel was lying about Fabia killing Kazarina. He also disliked subordinates like Jesse Glenn, and like Kazarina, had no problem with disposing of them to save his own skin. However, he seemed to get along with Lythirus.

He may tend to go overbroad with his enemies, going as sure as using an ability in spite of the fact that he will get Lumagrowl drowned in the process. He also had been smart enough to figure out that Dan and Shun were swapping Bakugan. He thinks highly of himself, as seen when Stoica complained that Gill should send Airzel to Bakugan Interspace instead of him.

Stoica made his first appearance in Revelation, he and the other Twelve Orders members were talking about Linehalt and Drago and also about how Drago is too strong. Airzel berates Stoica, saying that he should take things seriously for once.

He reappeared once again in Hostile Takeover.

In The Sacred Orb, he appeared along with Lythirus to battle Marucho and Awkimos. He was doing fine until the Sacred Orb transported all Gundalians the away.

In The Secret Switch, he and Lythirus appeared with Jesse and Plitheon. They battled Fabia and Aranaut and later Dan and Hawktor. Despite his ingenuity, he did not realize that Dan and Shun switched their Bakugan before the battle. He and Jesse ultimately lost, even when Stoica pulled out his Battle Gear.

He appeared in Battle For the Second Shield, saying that Kazarina would have problems.

In Curtain Call, he appeared alongside Kazarina trying to decide who else they can blame for their failures in stopping the brawlers. He decide to blame Jesse but before they can punish him he escapes. Once Ren brings Jesse back he and Kazarina eliminate him. Then on their way to tell Barodius of Jesse's elimination, Nurzak berates them for needless punishment of a fellow operative, Nurzak even claims he can "smell" their treachery. 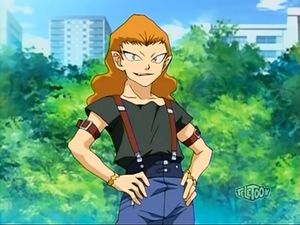 Stoica as a human

In Mobile Assault, Stoica goes with Ren to Bakugan Interspace changing into a human disguise. Then he says he wants to hunt humans in their natural habitat and heads to Earth where he brings Koji to Gundalia to be hypnotized by Kazarina.

In Colossus Dharak, Stoica and the rest of the Twelve Orders invade Neathia to destroy the Second Shield. Stoica battles Marucho.

In Dragonoid Colossus, he defeats Marucho while Gill defeats Jake. He retreats with the rest of Twelve Orders when Linehalt uses his forbidden powers.

He reappeared in True Evolution with Kazarina.

In Redemption, he teamed up with Kazarina to battle Nurzak and Fabia. With the help of their Battle Gear, they broke a hole in the floor and defeated them, but later rematched them. This time, Kazarina hypnotized Ren's old team to help them, but Stoica used an Ability Card that flooded the entire arena to attempt to kill Nurzak and Fabia. Somehow, he talked underwater like he could breathe it.

In Final Strike and Dream Escape, he battled Shun to no result.

In Gundalian Showdown, he battled the brawlers on Gundalia with the rest of Twelve Orders. He alongside Gill and Airzel were supposed to go to Neathia to help Emperor Barodius but only he and Airzel left because Gill's ship was supposedly damaged and although Airzel didn't suspect anything Stoica seemed suspicious about why Gill hadn't gone with them.

In Broken Spell, he reveals that he overheard Gill talking with Airzel about Kazarina and forces Airzel to admit that the reason that Gill stayed behind was to kill Kazarina himself. When Airzel was confessing that, Stoica turned on the speakerphone so Barodius can overhear it.

In Code Eve, he helps Emperor Barodius attack Neathia to get the Sacred Orb. He and Lythirius blind Dragonoid Colossus so Dharak could attack him, but Dharak betrays them and all three of them are killed by Dharak's attack.

Like the rest of the Twelve Orders Stoica is a strong brawler, only losing two battles.