Bakugan: Evolutions (爆丸エボリューションズ, Bakugan Eboryūshonzu?) is the name of the fourth season of the 2019 Bakugan Reboot, preceded by Bakugan: Geogan Rising.The first episode debuted on February 6, 2022. This season introduced new Variants such as Platinum Bakugan and Genesis Bakugan, as well as Nanogan, a new gameplay element. 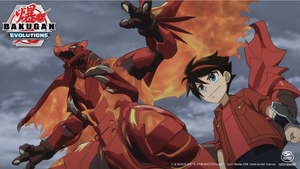 Bakugan: Evolutions introduces new molds as well as featuring some returning ones. It also introduces two new Variant s: Platinum and Mythic Bakugan, and a new Faction type: All-Faction. In addition, it introduces a new gameplay element called Nanogan, which its size resembles the 28mm Bakugan from the Legacy series. They only can be used if one of your Bakugan shares its Faction and once per game. They also provide special effects according to your team cores when using them. 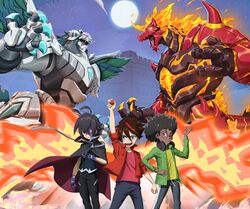 In Bakugan: Evolutions, fan-favourite Bakugan heroes – including Drago, Trox, Pegatrix, Hydorous, Howlkor and Pharol – return stronger, faster and better than ever! Strange occurrences begin to happen in the new action-packed season; elemental energy from Vestroia is seeping into Earth, creating strange phenomena and causing Bakugan to rage out with excess energy! It's not all bad though, as our heroes realize the Vestroian elemental energy is also causing elemental evolutions among our Bakugan! Along with these new evolutions comes a new breed of elemental brawlers, propelling the Awesome Brawlers to adapt and in effect, take Bakugan brawling to a whole new level, unlocking even more awesome powers and evolutions! Once again, the fate of two worlds, Earth and Vestroia, rests in the hands of the Awesome Brawlers and their Bakugan partners.[2]