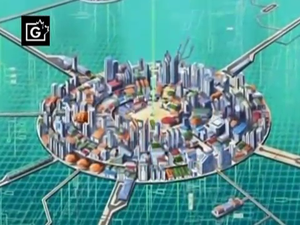 Bakugan Interspace (爆丸インタースペース, Bakugan Intāsupēsu?) was a virtual dimension that was designed by Marucho and appeared in three seasons of the anime. It is upgraded every season it is in, but was eventually deleted in the Interspace Armageddon. The "players" actually get transported into cyberspace to brawl, and when it upgraded, now includes multiple arenas to brawl. 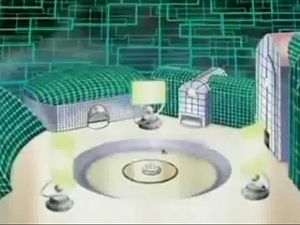 Bakugan Interspace was introduced in Virtual Insanity, and it is originally designed to give the Brawlers the ability to practice brawling instead of waiting for the Vexos, but this was later withdrawn after Shadow Prove and Mylene find out their hideout. It is where Ace fought Julie and Billy and won.

In Phantom Data Attack, four Bakugan called Aranaut, Hawktor, Akwimos, and Coredem appeared due to some Phantom Data. Also, it was shown to be able to create Avatars and possibly virtual Bakugan, though the latter is can only be created when Bakugan data is available.

In Fusion Confusion, Dan and Keith had a battle there in order to test Helix Dragonoid's abilities and create a Bakugan Battle Gear for him, and the test is finally successful in Volt's Revolt. In the Baku-Con New York live coverage it shows a preview of Gundalian Invaders and it shows Dan throwing Helix Dragonoid and a Battle Gear into the field in Bakugan Interspace.

In Mylene's Meltdown, Keith and Mira lured Mylene and Shadow into the Interspace to keep them away from the Phantom Data. They successfully defeated Mylene and Shadow Prove. After that, Mylene attempted to send Keith and Mira to another dimension using a Death Bomb, but it ended up adversely interacting with the programming of Bakugan Interspace instead, thus destroying it, and sending Shadow Prove and Mylene to a different dimension in the next episode.

At the end of Final Fury, Marucho was able to repair it along with the mysterious Bakugan, just in time for Bakugan: Gundalian Invaders. Shun and Marucho were able to claim the Bakugan for their own. However Ren appears, apparently wanting to help with Interspace's final development, claiming that they needed his help due to the lack of available Bakugan, he gives Marucho a more complete copy of the Phantom Data, which allowed Marucho to create the desperately needed Synthetic Bakugan and finally make Bakugan Interspace available to everyone. Bakugan Interspace is a place that kids from around the world can battle.

In the third season, Bakugan Interspace has been highly upgraded and has finally been released to the entire world. It is a free worldwide service run by Marucho who is spokesperson and CEO, and Ren, who is the data manager. In this season Interspace is a major component. The new battle system revolves around Interspace and is quite similar to that of New Vestroia's, however Gauntlets have been replaced by BakuMeters and the "field open" has made its return. Interspace now uses many large domed facilities and is open to the public free of charge. To get in you must receive an entrance card and make a password or be brought in with an existing member (which is shown in Twin Attack by Dan). When a person first logs in they will receive a BakuMeter with a different color depending on the person's preferred attribute. They will also receive a Synthetic Bakugan of their choice of type and attribute to use; the Bakugan they are able to choose from are Snapzoid, Luxtor, Spidaro, Jetro, Fangoid, Ramdol, Ziperator, Megarus, Gren, Nastix, Scaboid, Farakspin, Damakor, Lumitroid, Clawsaurus, Glotronoid, Splight, Raptorix, Merlix, Longfly, Volt Elezoid, Buz Hornix, and Venoclaw. People with their own real Bakugan are allowed to use them instead. There are many servers used for the battle rooms, designated by a letter and a number; for example F12, the server where Shun and Shuji first battled. Players may freely move between servers to witness battles and when it is their turn they will be notified in the server that they are on.

However, it was eventually infiltrated by the Minor Twelve Orders to attempt to recruit the battle brawlers to their side and when that failed, Ren took control of Bakugan Interspace and anyone who entered it would be brainwashed and recruited into the Gundalian Army. Under Ren's leadership, it has been shown that all of the buildings are enveloped in thorns. Outside, it looks like Dragonoid's closed ball form.

During the year after the end Neathian/Gundalian War, Bakugan Interspace was fully revamped with new structures and upgraded battlefields with advanced stands, which now move out of the range of battle while still providing an optimal view of the fight. The battlefield can also project a "solid vision" battle field.

It was also stated in Interspace Showdown that it has become open source.

Mag Mel had also begun to infiltrate Interspace, using Team Anubias and Team Sellon. As his power grew the golden armored stranger began to send Chaos Bakugan into the virtual reality world, As of the end of Triple Threat, Mag Mel's forces invaded Bakugan Interspace in the form of a swarm of Chaos Bakugan.

In Interspace Armageddon it was deleted by Marucho, nearly killing Dylan, Spectra, Helios, and Slynix.

The new Interspace has now become host to the new competition; the Bakugan Interspace Grand Prix which will be a major plot point for the new season. So far the current 1st place brawler in the competition is Shun, followed by Anubias, Sellon, Marucho, and Dan in 5th. The competition also seems to have a team system.

Mechtogan were not originally accepted since Dan got disqualified for using Zenthon but since episode 10, it appears Mechtogan can be used without breaking the rules.

The Bakugan Interspace Facilities are large red dome shaped facilities in cities worldwide. Inside they contain many moving belts leading to rooms where people can "log in" or places for people to simply relax. The log in rooms are locked and can be accessed using a "Brawler's ID" ; these rooms contain pods for participants to stand in. Within the pods individuals are digitized in a manner similar to many other science fiction shows and sent into Interspace. Updates in Interspace can be seen constantly in the facilities.

Along with Neathia, Bakugan Dimensions allowed the player to access Bakugan Interspace. To reach Interspace, a user would go to the school and click on the Internet Terminal, then Click on Log into Interspace.