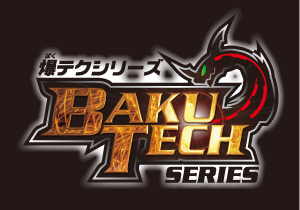 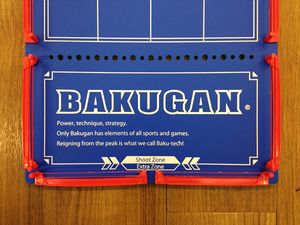 BakuTech (爆テク, Baku Teku?), Baku-tech, or Bakugan Technical, is the second series of Bakugan franchise in Japan. According to Bakugan Japanese official website, BakuTech is a series of Bakugan with outstanding performance,[1] while some are just differently packaged Special Attack Bakugan or Baku Sky Raiders, some are completely original, from manga BakuTech! Bakugan and have the feature of being able to swap parts from other such Bakugan, called BakuTech Convert System.

The official description of BakuTech on Official Battlefield W STD is: "Power, technique, strategy. Only Bakugan has elements of all sports and games. Reigning from the peak is what we call Baku-tech!". CoroCoro Comic consists in the development of this Bakugan series.[2]

BakuTech Convert System can enable different Bakugan with this system to exchange parts made of different material, such as metal and plastic.

At the beginning of the series, most of the Japanese original BakuTech has stickers for decoration of Convert Parts, but it is not the case later after Gran Panzer.

The reissued older releases of the BakuTech series bear the suffix of Kai (改, kai?) after their names. Kai is from the Japanese verb meaning "modify" or the noun meaning "reformation." As the suffix suggests, each of the Kai releases have a different color palette from the original releases. More importantly, each of them has some of the plastic non-Convert Parts, usually located at the lower part of the Bakugan, changed into metal, which lowers the center of gravity of and gives extra weight to the Bakugan, consequently increasing its defensive power. However, the change of the center of gravity may make the Bakugan only suitable for curve shoot with its Convert Parts unchanged.

The BakuTech released as Kai are Blan Shoult, Zak Jaguard, Killer Volca, and G-Ganorada. Saint Aquas was planned to be released in BTC-59 as Kai as well but it was believed to be canceled.

Earlier BakuTech series (BTC-01 to BTC-11) have the Bakugan in a blister card packaging, however, from BTC-12 onwards, some BakuTech from the blister carded series (particularly that of Team Dragaon) have been re-released in new packaging.

For the individual packaged BakuTech; this new packaging consists of creatively-designed boxes with hang tabs depicting shots and information about the contents of the box. Inside the box is a cardboard tray that holds the Bakugan in place. The Metal Gate Card, Ability Card, instruction/play manual, enquette code post card (and occasionally stickers) are placed in the fold-up compartment underneath.

From BTC-38 and starting with the Shadow Sanjushi's Partner Bakugan; BakuTech series were presented in Window Box Packaging. This type of packaging was retired after the release of the BTC-47 Shield Leoness. BTD-01 UijinDeck Team Dragaon up to BTD-06 Win Deck are also packed in Window Box Style.

The same type of package as the repackaged editions of the first few releases returned starting with BTC-48 Hagger Doguma. Slight modifications are made to the said type of packaging for the Gachi series such as having a slanted top. For the Decks starting with BTD-07 Champion Deck; three Bakugan are packed the same way as the said packaging albeit bigger.

Unlike the Bakugan in the Battle Brawlers series, the naming of BakuTech Bakugan is more Japanized, as the supposed target market of BakuTech is Japan.

Each of the BakuTech's Japanese name includes a kanji, which briefly explains the characteristic or nature of that BakuTech. However, this kanji will be read according to neither their on'yomi, or kun'yomi; instead, the first word of that Bakugan's name is assigned as the reading of the kanji.

Besides kanji included in the name of each Bakugan, BakuTech's name are mainly of Japanese origin. The most notable example is Kachia Gell, which the whole name is devived from the Japanese phrase for to strike opponent's upper body from below with elbow, 搗ち上げる. Nevertheless, it is more common that only the first or second word of the name comes from Japanese, for example, 'Gavli' in Gavli Anacon is derived from biting, かぶりつく (kaburitsuku) and 'Odos' in Dagger Odos is derived from to threaten, 脅す (odosu). Few BakuTech have a Japanese onomatopoeia as their names' origin, such as 'Dragaon' in Flare Dragaon that one of its derivations is the onomatopoeia for roaring, 'gao'.

On the other hand, English is also a common derivation for BakuTech's name. Besides apparent examples, there are also some more implicit cases like 'Win Dmill' which is a pun on windmill and 'Doubrew' in Twin Doubrew which is a pun on the Japanese pronunciation for W (ダブリュ, Daburyu?).

Still, some BakuTech's name has an origin other than Japanese or even English, such as 'Gran Panzer', which is the German for "Grand Tanks", and 'Dio Sivac', in which 'Dio' is the Italian for God while Sivac may be derived from a major Hindu deity called Shiva.

A BakuTech's name is not restricted to a single origin. For example, 'Mahisas' in Borg Mahisas which comes from the Japanese for paralysis, 麻痺 (mahi), and to sting, 刺す (sasu), and 'Gezard' in Acro Gezard which may be a portmanteau of Gecko and Lizard, or also be derived from the Japanese for prostrating, 土下座 (dogeza).

As shown in the Packaging, there are three main types of BakuTech: "Technique and Trick", "Attack and Balance", and "Defense and Occupied".

Unlike the Battle Brawlers series that follows a strict and standard color schemes and shades for every attribute per season; BakuTech largely deviated from that established trend.

Pyrus BakuTech have Garnet red as their predominant color. Secondary colors could range from Pure white and bright yellow. The most notable BakuTech to deviate from this color scheme is G-Ganorada which has frosted orange and gold as its secondary colors.

Aquos BakuTech have Sapphire blue as their predominant colors. Secondary colors are Pure White for earlier releases such as Saint Aquas and Killer Volca; while later releases like Gif Jinryu have silvery secondary colors.

Subterra BakuTech also do not have a common color scheme with each other as if they have their own color palette for each release. Gran Panzer has a darker tan compared to the standard Subterra Bakugan from the Battle Brawlers series (Bakugan: New Vestroia at the time when Panzer is released in Japan). Acro Gezard is predominantly bright yellow with neon green and black highlight. The only Subterra BakuTech that seemingly have the same colors are Zak Jaguard and Gavli Anacon with mostly solid yellow coloring plus black secondary colors, and Hagger Doguma and Tor Nado with granite black coloring plus gold and red secondary colors similar to Darkus BakuTech mentioned below.

Haos BakuTech are primarily Solid White in color with some sky blue and bright yellow secondary colors. Gigan Taures is the most unique of the bunch as its original color scheme has Black as its base color.

Darkus BakuTech are mostly predominantly granite black in color. Their differences are in their secondary colors notaby the others having it in red and yellow or gold; Zakuro's Dio Sivac, Bone Skuls and Seis Tavanel in frosted apple green.

Most BakuTech releases have the standard 32mm diameter as B2-sized Bakugan. However, some later releases have slightly greater diameter (36mm, same as BakuBlaster) to accommodate extra features and increase occupying area. There are no 36mm Bakugan equipped with BakuTech Convert System, until the release of Sanzu Hollowbos.

Most instruction manuals contain enumeration of the parts included in the package, explanations about the BakuTech Convert System, guide on how to close the Bakugan and brief description of the Bakugan. Besides, there is extra content sometimes.