Flare Dragaon (焔(フレア)ドラガオン, Furea Doragaon?) is a dragon-like Japanese original Bakugan from the BakuTech series which is the original form of Dragaon-type. It evolves into Gren Dragaon, then Rise Dragaon and Jigen Dragaon.

Dragaon showed its ability to communicate with its owner telepathically in Harubaru VS Koh, Concludes!!.

In Self-Evolving Bakugan, together with Destroy Munikis, it is revealed that Flare Dragaon is one of the Bakugan that can evolve by themselves through the unbreakable bond they formed with their brawling partner, which makes them a cut above the rest of the BakuTech. 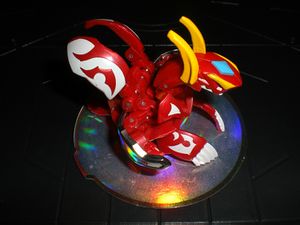 Flare Dragaon is equipped with BakuTech Convert System which enable part exchange within the same type of Bakugan, such as Destroy Munikis. Two Flare Metal Cross are equipped on its arms, making this Bakugan capable for an easy Critical Hit. It also has Two Normal Soles. Flare Dragaon has unusual color combination in Pyrus compared to other Bakugan released at the time, with pearl red as its main color and white as its highlight, beginning the trend of Pyrus BakuTech Bakugan coloring. It is also one of the first Bakugan that uses stickers for decoration. It has a shiny texture as well, which is not owned even by most of the Bakugan in BakuTech Series.

The Kanji in the Japanese name of Flare Dragaon, 焔 (On: en/ Kun: honoo), means flame. 'Dragaon' is derived from the word 'Dragon' and the onomatopoeia for roaring, 'gao'.