Gif Jinryu is used by Tatsuma.

Gif Jinryu was given by Master Shimo to Tatsuma so that he can have his own Guardian Bakugan to compete with. From Normal Crosses, Jinryu was upgraded with Dusty Metallic Cross Parts.

Later, it was shown that Gif Jinryu is capable of possessing people. He was shown speaking to Dagger Odos who took a shady form and as a response, Jinryu possessed Tatsuma in order to fight The Shade of Odos. 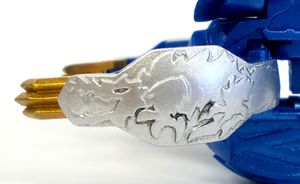 It is equipped with BakuTech Convert System which enables part exchange within the same type of Bakugan that two Normal Crosses are on its arms. Gif Jinryu has unusual color combination in Aquos which has silver as its highlight.

There are three ways to acquire Gif Jinryu:

The 3000 senders that will be drawn will receive their Gif Ginryu on July 2012.

The Han character in the Japanese name of Gif Jinryu, 蒼 (Aoi), means blue. 'Gif' may be derived from gift, given that Gif Jinryu was at first distributed only as a gift for having nine stickers on the BakuThlon Cards.