Alpha Hydranoid, Alphard Hydra (アルファードヒュドラ, Arufādo Hyudora?) in the Japanese version, is a Bakugan, the evolution of Dual Hydranoid and the final evolution of Hydranoid. He was originally the Guardian Bakugan of Masquerade, an alternate personality of Alice Gehabich, but he was given to Alice after Masquerade's personality was destroyed.

The three-headed Alpha Hydranoid is a dragon-like Bakugan, featuring a dark skin tone that makes him difficult to see at night. His hard, metallic armor can sustain multiple blows from attackers, and his dark blasts can destroy all elements.

This evolved form of Hydranoid comes equipped with metal armor that can take blow after blow. He can launch fireballs from each of his mouths that are capable of melting just about anything. Alpha Hydranoid prefers fighting at night so he can blend into the darkness and catch enemies by surprise.

Alpha Hydranoid is the second evolution of Hydranoid, coming after Dual Hydranoid. It evolved after Masquerade's brawl with Exedra.

He battled against Drago and lost.[1]

When Masquerade left Alice's body, Alpha Hydranoid officially became Alice's Guardian Bakugan. With Alice, he has been far less destructive and aggressive towards his opponents, especially Drago, whom was once his greatest foe. This is the only Bakugan that has had two former masters without being taken by force.

When Alpha Hydranoid fought alongside Alice against Rabeeder, Rabeeder crystallized him and almost transformed him into a statue, yet since his heads were still free, Alice realized that Hydranoid could still perform his signature move—Death Trident—to take down Rabeeder. Alpha Hydranoid's three heads each have their own distinctive voice, however they all share the personality. He has shown unconditional affection for Alice, spending much of his time on Earth to accompany his master. 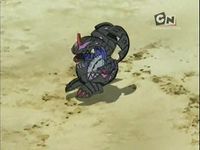 In a way, Alpha Hydranoid gave birth to the Battle Brawlers Resistance as Mira heard him talk when he was being tortured by Professor Clay and his assistants, making her realize the Bakugan were intelligent (sentient level) creatures and formed the Resistance to set them free. A mechanical mimic of Alpha Hydranoid named Hades was used by Shadow Prove in his battles against Shun Kazami, Dan Kuso, and Baron Leltoy and later in a rematch against both Shun and Marucho Marukura (Shadow had brawled Marucho in his battle prior to his first use of Hades against Shun). The mimic was created by Professor Clay possibly from the data the Vexos got from torturing him. In the episode preview Shun calls him Hydra. He is friends with Ingram.

Alpha Hydranoid is then freed by Mira, Shun, and Marucho as well as the other Bakugan that Prince Hydron had turned to bronze statues. When Dan, Marucho, Shun, and the other brawlers' Guardian Bakugan return to earth, Alpha Hydranoid returns to Alice. Based on Drago's statement about the Six Fighting Bakugan who were captured Alpha Hydranoid was the fourth with Preyas, Hammer Gorem, and Storm Skyress being the first three respectively and Blade Tigrerra being the last.

Alice and Chan Lee team up against Shadow Prove. Hydranoid destroyed Hades but was beaten by MAC Spider.[2]

Sometime between the repair of Bakugan Interspace and Mechtavius Destroyer's revival, Hydranoid returned to New Vestroia.

He was seen with an army of Bakugan trying to protect New Vestroia. He was later destroyed by Mechtavius Destroyer.[3]

The Brawlers used the Current of Time to go back and destroy Mechtavius Destroyer. It is unknown what happened to Alpha Hydranoid after this point.

Alpha Hydranoid was originally released as a Special Attack Heavy Metal Bakugan. It is available in Darkus, Haos, Pyrus, Subterra, and Ventus. The highest G-Powered attribute made was the Subterra version at 750 Gs. You can also get a 650 Gs Subterra version. The Haos version comes with 630 Gs. A non-metal translucent version was released as part of the Masquerade Brawler's Evolution starter set, which also included Hydranoid and Dual Hydranoid.

Alpha Hydranoid was re-released for Mechtanium Surge, along with Dharak and Cyborg Helios, as part of the BakuEvolutions "Evil" set. Available in Darkus only, it received a new color scheme to match the other Mechtanium Surge Bakugan and a DNA Code for online play. This is the strongest version available at 800 Gs.

Alpha Hydranoid does not make an actual appearance, but appears on the Black Hole Gate Card.

Evidence of other possible Attributes for Alpha Hydranoid

Alpha Hydranoid was available in Bakugan Dimensions. It was only available in Darkus, although other attributed DNA Fragments were seen.