Joe Brown (Japanese version: Osamu Jō (城 治, Jō Osamu?)), also known as Webmaster Joe, is the webmaster of the Battle Brawlers' Bakugan website and a major character in Bakugan Battle Brawlers. He uses Wavern and Haos Bakugan. He is hospitalized due to low blood sugar, but he gets out of the hospital quickly after he first appears.

Joe Brown set up a website related to the Bakugan falling from the sky. Dan Kuso and Shun Kazami were among the first people to sign up in the site.

One day, Dan and his friends came up with the idea that someone in their group was spying on them for Masquerade. They suspected Joe since he was the webmaster and must have allegedly been telling Masquerade their activities. Chan Lee told them that Joe was in the hospital and they went there. He found Drago, who was accidentally dropped by Dan, and while Dan was trying to get info, Joe was just engaging in idle chit chat. 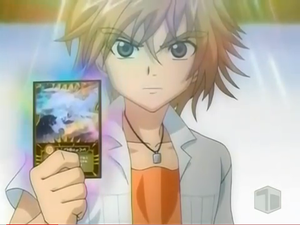 Then Joe requested that he and Dan battled for the information. During the brawl, it quickly become apparent he had never been in a brawl before, becoming very excited and interested; but before they could finish their battle, Joe suddenly collapsed. Then, Wavern, a Bakugan who held the Infinity Core called to him and used Positive Energy to wake him up. After that, Wavern became the Guardian Bakugan of Joe. Additionally, the group was convinced that Joe wasn't a spy of Masquerade, since he posted a message on his website involving him telling any brawlers to not fight Masquerade if they run into him. Joe then became an official member of the Battle Brawlers.

He later fought Masquerade with Wavern and nearly loses but later won, becoming the first person to beat him one-on-one. After Dual Hydranoid evolves into Alpha Hydranoid Masquerade challenges Joe again for the Infinity Core, but Dan shows up and battles him instead.

Later when Wavern died he was shown to have thought of her as a friend. At the end he is shown in the background with Chan Lee confirming that they are indeed in love.

In Duel in the Dunes, Joe briefly appears in the group picture taken back in Season 1 shown by Dan.