Ravenoid, Crow (クロウ, Kurō?) in the Japanese version, is a bird-like Bakugan with plated battle armor.

Gigantic wings let Ravenoid swoop to attack its prey from the sky. Large clawed feet squeeze its victims in an unyielding vice. It covets complete destruction of its enemies.

A Ravenoid might look like a bird, but it's got some heavy-duty extra protection. Its entire body is covered in plated armor.

Ravenoid is a Bakugan that looks like a humanoid raven. Its swoops down from the sky to attack its prey, grabbing it in its strong claws. Few Bakugan can escape Ravenoid's vice-like grip. Plated battle armor protects it from attacks. 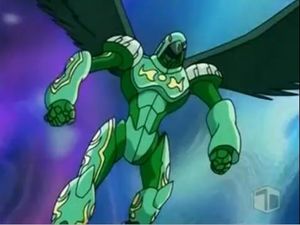 Dan Kuso once had a Pyrus Ravenoid. Shun Kazami had two Ventus Ravenoid, in which one of them was sent to the Doom Dimension. Shun also used one in his battle against Oberus in A Place Far From Home.

Nene has a Ventus Ravenoid as her Guardian Bakugan.

Runo has a Haos Ravenoid which was sent to the Doom Dimension by Tentaclear, it returned in Home Sweet Home. 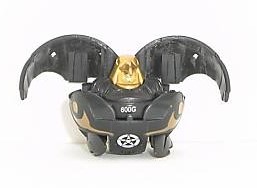 Ravenoid was planned to be remade in Mechtanium Surge as a Baku Sky Raider with a slight adjustment to the feet to allow it to jump, but was never released.

Ravenoid is in the Bakugan Battle Brawlers DS and Wii version. If you buy the game from Toys 'R' Us and go into the in-game store, you can find Ravenoid for 0 BP, which means that he's free in the video game.