Phantom Dharak (ファントム・ダラク, Fantomu Daraku?) is a Bakugan and Dharak's first evolution in the anime. He is Emperor Barodius's Guardian Bakugan in the anime. It was later revealed that Code Eve caused the evil in his heart to mutate him into Razenoid, and imprisoned him and his master in an alternate dimension.

Phantom Dharak is a double-strike Bakugan with a fierce attitude. He has quadruple wings which make Phantom Dharak one of the most advanced Bakugan. Pointed horns sprout from his head to prevent attacks. He knocks out the opposition with sidewinder leg kicks. 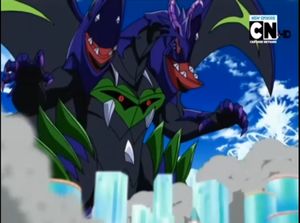 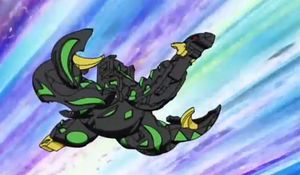 In Final Strike, Emperor Barodius's Guardian Bakugan, Dharak, evolved into Phantom Dharak due to Kazarina fusing his DNA with Blitz Dragonoid's. When Kazarina asked if Emperor Barodius wanted to rename Dharak, he renamed him Phantom Dharak (even though that is his real/true name) and now that he has some of Blitz Dragonoid's DNA, this means that he has become a hybrid Bakugan, meaning that he is half Gundalian and Vestroian, which would now allow him to pass through the Neathian Third Shield without getting defeated (like in episode 27 when Krakix tried to destroy it but was defeated). Also after his evolution, he became obsessed with defeating Drago but his master, Emperor Barodius, ordered him to calm down and he immediately returned to his calm subservient tone. Later on, he and Barodius were going to Neathia to destroy the Third Shield, but before they went, he said to Kazarina, "Do not lay a finger on Drago, he's mine", meaning that he wanted to destroy/defeat Blitz Dragonoid himself in a battle.

In Dream Escape, he was used by Emperor Barodius to destroy the Neathian Third Shield and he destroyed it with one strike. Before he could destroy the 3rd Shield he had to go into it because it had a DNA Barrier that prevented Gundalian DNA (including Bakugan) from passing through it, but now because he evolved from Blitz Dragonoid's DNA, he had become a Hybrid, alllowing him to pass through the Third Shield without getting defeated.

In Gundalian Showdown, he didn't battle but he just watched the battle against the Neathians and the Gundalians because all the Gundalian were doing fine and they didn't need any help until Dan and the others showed up.

In Broken Spell, he watched the battle against Strikeflier and Blitz Dragonoid and he said "You're going to learn the hard way Drago because now I'm the Ultimate Bakugan". He later battles Blitz Dragonoid, Hawktor, Dragonoid Colossus, Phosphos, Rubanoid, Contestir, Akwimos, Coredem, Raptorix, and Linehalt and lots of other Neathian Bakugan alongside Strikeflier, Lythirus and lots of Gundalian Bakugan. He then defeats all the Castle Knights with Photon Gladiator, and the battle couldn't be decided due to the episode finishing.

In Destiny Revealed, he, Barodius, Dan and Blitz Dragonoid listened to Code Eve about the origin of Bakugan and how he and Drago were always destined to battle each other to determine who would become the Ruler of All Bakugan. He then battles Blitz Dragonoid and wins the first round, but is defeated in the end. Unable to accept defeat, he and Barodius try to take the Sacred Orb's power by force, but Dharak is unable to handle the power and was thought to be destroyed along with his master.

Dharak first reappeared in Re-connection during flashbacks from previous episodes.

In Behind the Mask, Razenoid revealed that he was once Phantom Dharak, and that Code Eve used his anger and hatred to mutate him into his current form and banish him to a reverse dimension along with his master Barodius, who was also mutated into Mag Mel.

In The Final Takedown, a ghostly image of Phantom Dharak appeared in front of Evolved Razenoid.

It is part of the BakuDouble Strike series. Thus, there is a button and when you push the button, Phantom Dharak will open all the way like Phosphos, Snapzoid, Avior, and Blitz Dragonoid. It also has a G Power on its wings that can be used on an enemy's Gate Card, just like Dartaak. The Darkus version has 820+100 Gs in BakuBoost and 700+50 Gs in BakuTriad, the Haos version has 800+50 Gs and the Aquos version has 670+80 Gs. His other Attributes are unknown. It was released in September.