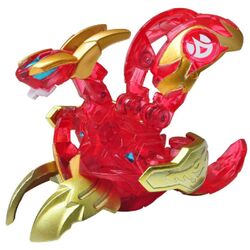 Translucent Bakugan, also known as Glow or Lyte in New Vestroia, are a type of Special Treatment Bakugan. At the beginning of battle can either choose to keep their assigned Attribute or change it to their opponent's. They are as their name says, Translucent. Another name for Translucent is Lyte. Besides the regular one there are four more types of Translucent Bakugan which function with no differences, namely Neon, Glow, Solar and Phantom.

Neon Bakugan are Translucent Bakugan with fluorescent plastic instead of the usual one. Neon Treatment is exclusive to Pyrus, Aquos and Ventus. It is sometimes hard to distinguish Aquos and Pyrus neon Bakugan from normal translucent ones, due to them having very similar colors - neon Pyrus and Aquos Bakugan are jus a bit brighter. They are first released in BakuNeon series. Bakugan released in this treatment are:

BakuSolar are Translucent Bakugan in solar orange color and yellow highlight but not always in Pyrus. It was released in the second B3 Wave but its release didn't last long. Bakugan that were available in Solar treatment are Freezer, Ultra Dragonoid, Stug, Atmos, Hyper Dragonoid, Viper Helios, Shadow Vulcan, Abis Omega, Ingram, and Myriad Hades.

BakuPhantom is translucent Bakugan released as a part of the Bakugan: Mechtanium Surge. Bakugan that were available in Phantom treatment include Skytruss, Jaakor, Kodokor, Mutabrid, Titanium Dragonoid, Alpha Hydranoid, and all BakuMutant. This Special Treatment is also planned to be applied not only for normal Bakugan, but but also for some Bakugan Battle Suit, such as Defendtrix and Combustoid. 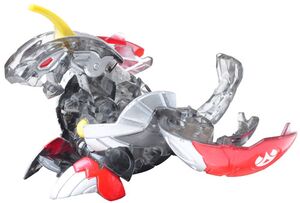 In Reboot, Translucent Bakugan first came back in form of Diamond, clear-like treatment similar to some 28mm Special Attack Bakugan, as well as Limited Edition set of 3 Dragonoid toys made of neon red plastic. During the Bakugan: Armored Alliance, second season of Reboot, normal translucent bakugan made their come back. Any non-Aurelus, non-Fusion Bakugan printed from Armored Elite Wave 2 and onwards that came with gear in set was printed in translucent color.

In Bakugan: Geogan Rising, normal translucent Bakugan were replaced with Variant called Elemental - those were translucent bakugan that had highlights in form of element patterns, like fire for Pyrus or purple smoke for Darkus.

Normal translucent bakugan came back in Bakugan: Evolutions, along with few new treatments, like Platinum - translucent Bakugan with extra paint applied (in case of old molds) with die-cast metal, as well as some other new translucent treatments.