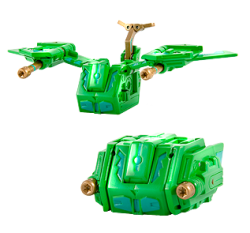 Bakugan Battle Gear can attach to the back of most Bakugan: Gundalian Invaders Bakugan. According to the rules, they can also be played with any Bakugan, include older Bakugan. Like Bakugan Traps, Battle Gear are played during battle. However, rather than changing Attributes, they give a small boost to G-Power, usually between 50 and 120 Gs, although they can add upwards of 270 Gs. There is a line of Battle Gear known as Deluxe Battle Gear which light up and blink when placed on a Bakugan or Gate Card.

There are 39 different Bakugan Battle Gear. Although they have the same Main Attribute Colors of the normal Bakugan, these colors are cosmetic and do not limit a Gear from being played on any Bakugan.

The symbols used for Battle Gear are different from that of a normal Bakugan and indicate Gold, Silver and Copper (which replaces the term Bronze in the new rules). Exactly which is which can be told from the detailing the Gear has, as the highlights on the Gear will match the color indicated. These colors also correspond to the Gate Cards of the same colors. In the anime, all Bakugan compatible with Battle Gear (except Krakix) have to have some parts of them moved in order for them to have the Battle Gear attached, while in the game, only some of them do. Unlike Traps, they aren't living Bakugan, instead taking on the appearance of weapons or machines.

In the anime, the characters press certain button combinations on their Gauntlet and then the Battle Gear assembles itself. Only one certain Battle Gear can be used on a Bakugan, as it is designed for its DNA signature.

As mentioned above, there are also special Battle Gear called Deluxe Battle Gear which light up and blink once put on a Bakugan.

Like Traps, Battle Gear can go on any Bakugan. For example, they will be able to combine with any old Bakugan as though new, but are used by placing them next to the Bakugan that's incapable having Battle Gear placed on it.