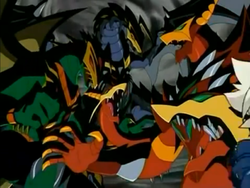 Chaos Bakugan are Mag Mel's servants in Mechtanium Surge. They are born from eggs inside the same dimension as Mag Mel's prison and can brainwash other Brawlers. They are used to give Chaos Energy from brawling to help Mag Mel and Razenoid get free from their prison. They share a link or bond with Mag Mel and Razenoid. An army of Chaos Bakugan invaded Interspace. A typical mass of Chaos Bakugan contains Subterra Iron Dragonoid, Darkus Cyclone Percival, and Ventus Flash Ingram.

The most distinctive feature of the Chaos Bakugan is they all have Razenoid's face on their chests. Some Chaos Bakugan have shown the ability to use this face in battle. Unlike normal Bakugan, which turn back into spheres when defeated, Chaos Bakugan simply fade away. It's possible they are mindless considering how Spectra Phantom describes them. As such, unlike most other organic Bakugan, they are incapable of speaking.

All Chaos Bakugan are named after existing species of Bakugan, though Cyclone Percival is the only type of Chaos Bakugan to actually resemble its namesake.

Some of the Pyrus Chaos Bakugan have a black and maroon color like Helios in season 2. Each of them also have a slightly different head with a horn at the nose tip instead of that of a regular Chaos Bakugan. Their weakness is the horns, though. They appear to be more agile and stronger in battle, thus they can be thought of as the elite forces of the Chaos Bakugan.