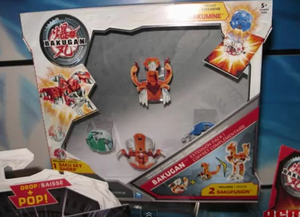 The ruling for BakuFusion is that if a BakuFusion stands on a Gate Card and another BakuFusion from the same user that is compatible with said BakuFusion stands on the same card, the owner of the two BakuFusions wins the card, even if there is another Gate Card in play. For example, if there are two Gate Cards in the field and you have a Roxtor on one and the opponent has another Bakugan on the other, if you stand a Radizen on the card, you win the card. If the two Bakugan are not corresponding BakuFusions, then you must move one of the Bakugan to the other card.