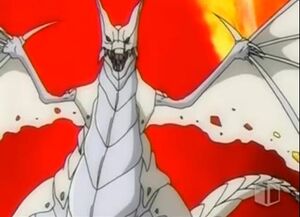 Naga, one of the two known "White Ones"

The White Ones are Bakugan that do not belong to any Attribute due to problems with their evolution. The only known members of this race are Naga and Wavern.

The White Ones are powerless, mutated Bakugan that are born in between dimensions during evolution. This began during the Great Revolution - the conflict caused by the Original Dragonoid and Dharaknoid, which made their universe split into the planet Vestroia; itself split into six different fragmented places; and Neathia and Gundalia. The split of Vestroia forced the White Ones to stay in-between the six shards. Also, they have shorter life spans than other regular Bakugan.

Naga and Wavern are the only two Attributeless Bakugan in the Anime and this trait does exist in the game (White Naga and BakuCrystal). While these Bakugan have no Attributes, Wavern seems to be treated as a Haos Bakugan and Naga as a Darkus Bakugan.

The White Ones only appeared in Bakugan Battle Brawlers. However, Wavern is mentioned in the Bakugan Battle Brawlers: New Vestroia episodes Return of a Friend and Exodus, while Naga is mentioned in Unmasked. They both have had power over one of the Cores (Naga - Silent Core, Wavern - Infinity Core). Wavern and Naga are both deceased and Drago now possesses the Perfect Core.

Wavern returned in Bakugan: Mechtanium Surge episode 11, Back In Sync, but only as a spirit form like the last time.