The Gauntlet is the standard brawling device used in Bakugan Battle Brawlers: New Vestroia, replacing the BakuPods of the previous season. As its name suggests, it is worn across the forearm like a gauntlet.

It was replaced by the BakuMeter in the following season.

The brawl will be started when all the battlers shout "Gauntlet Power Strike!" ("Gantoretto Chiyaji-on!" / "Gauntlet Charge-on!" in Japanese), after which, the center of the Gauntlet will flash and the brawl can begin. 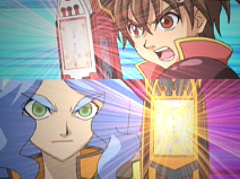 A Resistance and Vexos Gauntlet

Gauntlets come in the color of the attribute the person uses, and seem to be custom-made for the user; Marucho uses a smaller gauntlet due to his small stature, while Zenoheld possesses the largest gauntlet due to his imposing size. The Vexos Gauntlets were also customized to have black trim instead of white, and three horns on the rear.

The device is operated by pressing a button on the tip, and then the card holder will open. When the command "scan Bakugan data" is given, an area comes out, then the Bakugan is placed on it. Going through Dr. Michael's Dimensional Transporter required a Gauntlet, though the transporter has since been destroyed. It has also been used to hack online systems, so there are likely a myriad of technological uses for it aside from brawling.

On top of being used for Bakugan brawls, Gauntlets can also be used in actual hand-to-hand combat. By using a certain type of Ability Card, the Gauntlet will project a wide thin beam of energy the length of a long knife, which can then be adjusted as the user desires. It was first used during the final battle between Spectra Phantom and Dan Kuso in the finale of the first arc. Later, this function was used by Mylene Farrow to attack Mira and Spectra, and by Gus Grav to attack Zenoheld. 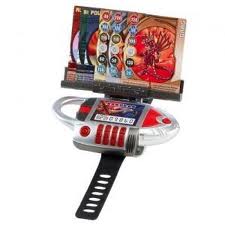 The Gauntlet was re-released early in Gundalian Invaders' toyline since New Vestroia was still airing when the Gundalian Invaders toyline was first released. There were only minor changes, such as changing the Ability Cards to match the new style of cards, making the Gauntlet a lighter grey, and changing the graphic on the screen so that it looked more like it did in the anime. It also included a code that could be redeemed in Bakugan Dimensions to receive BakuCoins.