—Gus, Show Me the Power!

Gus Grav (ガス・グラヴ, Gasu Guravu?) is the right-hand man of Spectra Phantom and a former member of the Vexos organization, until he and his master Spectra betrayed them and been labelled as traitors. He is a Subterra Brawler and is powerful in battle. He used Hexados as a Trap Bakugan and teamed up with the Subterra Rex Vulcan. He was presumed to have died while battling against King Zenoheld. In episode 42, Spectra states that Gus disappeared without a trace, but in episode 49, however, Gus was shown in a prison cell along with Hydron. He tricked Hydron into helping him escape to join Spectra in the final battle against Zenoheld. He and Vulcan later fought in the final battle against Mag Mel.

Gus has long, wavy blue hair and green eyes. He has an orange jacket denoting his status as a Subterra brawler, and wears standard Vestal attire underneath. He has tall brown boots and black fingerless gloves.

Gus is a strong brawler and faithful to Spectra, believing that Spectra has the answer to all that has been happening and is willing to follow him no matter what. Gus also tries to look out for Spectra whenever possible; when Spectra decided to bring Mira to the Vexos, as he thought that this plan would backfire on them, which it did.

He revealed that he used to be a normal brawler, and even faced off against Spectra. After losing, however, he pledged his loyalty. He is shown animosity from other Vexos battlers, namely Lync and Mylene, as "Spectra's little pet" and "Spectra's little lapdog." Mira introduces him to Dan as a "weasel, but the top Subterra brawler and a tough opponent." He hates Earth and Prince Hydron, but is fascinated by products on Earth, most notoriously "juice in a box". He calls Apollonir an "old thing" and a "hand me down Bakugan". 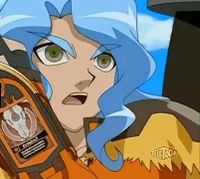 In Taste of Defeat, Gus goes out to defeat Dan Kuso after the other members have failed to do so. Once Gus locates Dan, he uses psychological warfare to cause Dan to doubt himself and his actions. After he reveals his identity, he defeats Dan in a brawl.

In Return of a Friend, Dan sneaks away for a rematch with Gus, only to discover that Spectra would also participate in the battle. Dan beats Gus and Spectra with Shun who joined the brawl.

In Unmasked, Gus and Spectra have already made their way back to the brawlers' location, and are seen riding the Gondola Wheel in the amusement park. When Mira challenges Spectra in order to find out if he was her brother, Keith, Gus twists the deal so that he would brawl in Spectra's stead. If Gus lost, Spectra would unmask himself; if Gus won, Mira would join the Vexos. Gus had the advantage until Julie Makimoto, the "original" Subterra master, gave Mira tips on how to win. Although Gus urges Spectra not to reveal himself, Spectra ignores his pleads and does so anyways.

Once the Resistance and the Vexos make it back to New Vestroia, Gus keeps a close watch on Mira, as he doesn't trust her. Once the brawlers get to Gamma City, Dan, and Ace face often against Gus and Mira. Spectra beforehand had Gus and Mira take the Bakugan that were being developed for Prince Hydron to test for himself. However, due to Mira purposely throwing the match, Gus and Mira lose, all six of the Bakugan are captured, and the last Dimension Controller is destroyed.

In Final Countdown, Gus then overhears the other Vexos planning on betraying Spectra and taking Professor Clay with them. Gus goes to Lync, having him go to Spectra for him, Lync double-crosses him, knocking him out and locking him up in a room.

Later, when Spectra is brawling, Gus finds Elico and Mega Brontes, only to be "thrown out like the trash" by Mylene Farrow because she does not think that it is wise to have a weapon with feelings. Gus then rides Premo Vulcan and saves Spectra after his fight with Dan. He also regrets to inform him that Mylene is intending to blame the whole thing on him.

In Spectra Rises, he had betrayed the Vexos and works with Spectra. He has also made Premo Vulcan, Mega Brontes and Elico evolve due to Chaos Ability X.

In Brontes' Betrayal, he faces Volt and wins but after the battle he throws Brontes back into New Vestroia saying that, "You have served your purpose, but now I am done with you".

In All Or Nothing, after Dan defeats Spectra in a battle, Spectra and Gus agree to accompany the Resistance to the Vexos' palace.

In Avenging Spectra, Spectra and Gus arrive on the Mother Palace along with the Resistance and confront the Vexos. He then challenges Zenoheld after the Vexos insult and accuse Spectra. He loses at the end of the episode, and he presumably lost his life, along with Rex Vulcan. Blast Elico and Hexados however actually died trying to protect him and Vulcan. His last words were to Spectra and wishing him fare well. In the end he apparently learned what Dan had tried to tell him from their first encounter about how much friendship matters because when King Zenoheld told him their battle would cost him everything Gus laughed and said: "No matter what happens you'll never take away the bond of loyalty and friendship that I share with Master Spectra!" and he was greatly upset when Blast Elico and Hexados were destroyed and when Rex Vulcan's armor was cracked, not to mention he apparently grew a giant bond of friendship with Vulcan in the end of the episode. Rex Vulcan and Gus are still alive but in Zenoheld's jail.

At the end of An Heir To Spare, it is revealed that Gus and Vulcan, survived the battle with Zenoheld and has been imprisoned since then. His cell was located across from Prince Hydron's, and he manages to overhear Hydron vowing to bring down his father.

In Ultimate Weapon, he tricks Hydron into starting a brawl inside the cells and breaking the cells. Gus rejoins Spectra and the Resistance to help fight against King Zenoheld and the Alternative.

In All for One, he watches the arrival of the Bakugan Battle Brawlers. When Spectra says that they are on the same side now, Gus says that he never thought he would live to see the day that they joined forces, but at the same time he was glad that they did, since he was almost killed by Zenoheld.

In Final Fury, he fights the Pyrus Fortresses to give the brawlers time to get into the Alternative. Just as he was about to go down, Hydron saved him and he evacuated with the other brawlers. After the Alternative explodes, he joins the Resistance, says farewell to them, and returns to Vestal with Spectra.

He reappears in Dark Moon operating the Vestal Destroyer while Spectra was battling. He also sent Doomtronic to Spectra and Blasterate to Shun and Paige.

He appeared in The Final Takedown battling and using Rex Vulcan.