(Redirected from Ace)
—Ace to his teammates in Virtual Insanity

Ace Grit (エース・グリッド, Ēsu Guriddo?) is a 16-year-old[1] Vestal and the Darkus brawler of the Bakugan Battle Brawlers Resistance. His Guardian Bakugan is Percival, and his Trap is Falcon Fly. Mira Fermin convinced him to join the Resistance after defeating him in a brawl, then giving him Percival to prove that Bakugan were sentient and not just mere toys to be played with.

Ace's only major appearance is in Bakugan Battle Brawlers: New Vestroia. Notably, he is also the only member of the Resistance that is not playable in the video game Bakugan: Rise of the Resistance, as he had been captured by the enemy Hurranians; the game-exclusive character Eva-Q8 fills in the Darkus brawler position in his place.

Ace is very cocky and hot-headed, which usually gets him into troublesome situations that make him regret the things he says. At first, Ace disliked the idea of having humans join the Resistance, but after tying in a battle with Dan, he accepts Dan and Marucho into their group. The similarities between him and Dan have caused tension between them.

He develops a heated rivalry with the Aquos Vexos brawler, Mylene Farrow, though their rivalry is never truly resolved—Mylene (and her partner, Shadow Prove) would eventually perish after causing Bakugan Interspace to collapse with a dimension bomb following her defeat at Mira and Keith's hands.

He has feelings for Mira, though she is oblivious to them, and has displayed his protectiveness of her many times through the series. He displays jealousy towards Dan and Keith due to Mira's attraction to Dan and her closeness to her brother. Because of this, he gets along better with Shun Kazami, although they started off with a rocky relationship (mostly because of his cockiness and stubbornness causing him to misinterpret Shun's actions). He is sometimes sarcastic, often questions others' ideas and is also very prideful. He lives alone, this explains for his independence and sometimes coldness. But to sum up, Ace is a good-hearted young person with a proud, stable personality, is not fearful and always eager to help his friends.

File:Ace-jap-op.jpg
Ace in the Japanese opening

After Mira returns to the Resistance hideout with Dan and Marucho in tow, Ace expresses his displeasure, believing that humans had no place in the Resistance. He brawls Dan to test him, which ends in a tie and they earn each other's respect despite lingering tensions.[2] On their way to Alpha City, he and Mira have an argument: Mira wants to postpone the assault of the Alpha Dimension Controller to look for her brother, while Ace fears that she could get hurt.

While deciding which two brawlers get to enter the Alpha City tournament, he and Shun are paired together. At first, Ace dislikes Shun for interfering with his battling style, failing to realize that Shun was actually helping them. The two's constant bickering nearly costs them the semi-final match against the The Dark Angels, but they manage to set aside their differences and advance to the final against Lync and Volt. The two successfully stall for time and manage to defeat Lync's Altair together. Afterwards, Shun mentions that Ace is a lot like Dan.

When Runo arrives on New Vestroia, Dan, Mira and Baron Leltoy accompany her back to Earth after Spectra, Gus, and Lync follow her. One of the three who remained in New Vestroia, he is lured into a trap when he believes he heard Mira's voice in the night (which was actually Shadow) and attempts to save her. After being defeated by Mylene, he was taken hostage along with Marucho and Shun and kept in a suspension tank. After Mira betrays the Resistance to follow Spectra, who she discovered was her brother's new identity, Spectra frees the three of them as a personal favor to her, unbeknownst to them.

When Dan revealed that Mira betrayed them, he refuses to believe it and goes as far as to grab Dan by the collar. He only came to accept it after hearing Baron's side of the story, which matched with what Dan told them. Despite this, he continues to hold a lot of faith in Mira, later telling her that he always believed in her.[3]

He returns to Vestal with Baron and Mira and their Bakugan after Prince Hydron is defeated and Tigrerra, Skyress, Gorem, Preyas, and Hydranoid are freed, in case the Vexos will want to take back New Vestroia for themselves in the future.

Along with Mira and Baron, they went on live television to tell all of Vestal what Zenoheld had really been up to and how Bakugan are intelligent creatures. This prompted the royal family and the remaining Vexos to flee Vestal to escape prosecution for their actions.

After their return to Vestal, he is called by the Six Ancient Warriors along with the rest of the Resistance and receives the Darkus Attribute Energy from Exedra, causing Percival to evolve to Knight Percival. Following Percival's evolution, Ace helps Baron find an apartment for himself, as his family is large and crowded. While browsing around a future building site of new apartment buildings as he daydreams of living in a building with the Resistance—albeit without Dan, Shun and Marucho, showing that despite everything, Ace hasn't really accepted them. He is attacked by Mylene and her new mechanical Bakugan Aquos Macubass, and he struggles against her new Bakugan and the Darkus energy is nearly taken. However, Klaus and Sirenoid arrive and help Ace defeat her.[4] After Alice was attacked by Shadow on Earth, the Resistance heads back to Earth and takes refuge in Marucho's mansion.[5]

After Julie watches him work out with Dan, she develops a crush on him, spurring Mira's jealousy. With Billy's surprise arrival, Mylene and Shadow discover their hiding place by trailing him. When Marucho shows them his virtual trainer, Ace is paired to fight with Billy. When Julie attempts to switch numbers with Billy and Mira, Runo reveals her crush on Ace, making Billy jealous. Ace, not wanting the break up the "lovebirds," challenges them both and defeats them both.[6]

When the Resistance attacks the Vexos Motherpalace and the Bakugan Termination System, Ace and Marucho rush to find Dan and Mira. However, they encounter Shadow and Lync who, using the Mother Palace to secure more power for their Bakugan, cheat to their victory, securing the Darkus Energy from Percival.[7] Dan loses the Pyrus energy to Zenoheld and the BT System goes fully operational[8], so Ace heads with the Resistance and Spectra to New Vestroia to evacuate all the Bakugan. Marucho heads with him to set the coordinates for his house to send the Bakugan, but he immediately insists on joining them, showing that Ace is still obviously distrustful of Spectra.[9]

After the BT System is destroyed, Ace stays on Earth along with Baron and Mira. When the phantom data appears in Bakugan Interspace, Ace and the others entered the virtual world and watched Baron battle against a clone of Haos Aranaut.[10]

Ace accompanies Dan to watch his final match with Spectra and after his defeat, he officially joined the Resistance, Ace is still cautious about him.[11] He resents the time Mira and Keith spend together,[12] which Julie points out and advises him not to worry about, as the two were only siblings; even Percival tells him to relax.

When the Alternative is complete, Ace, along with the rest of the Brawlers, battle it. Four of them went inside the Alternative and destroyed the core. After that, he bids farewell and heads back to Vestal with Keith Fermin, his sister Mira, Gus, and Baron in Final Fury. In the Japanese special ending, Baron accidentally hits him with a ball while playing with his siblings, causing an infuriated Ace to chase him (with Baron's siblings running alongside them). 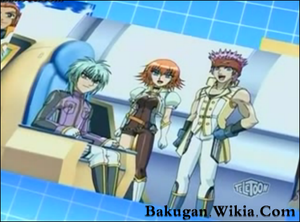 Ace makes a cameo appearance, shown in an image along with Mira and Baron when Marucho was reflecting on the good old days of the Battle Brawlers.

In the Toys 'R' Us live event, Bakugan Battle League, Ace returned to help get Marucho out of Bakugan Interspace, but lost to Shun in a battle to see who would go with Dan to Bakugan Interspace so he waited outside of this place.