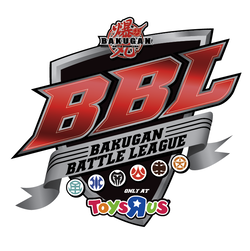 The Bakugan Battle League was a battling event exclusive to Toys 'R' Us, where participants battled, traded, and conversed with other Brawlers. This was different event than others, because participants received a membership card and a "story." The story had two outcomes, and the participating Brawlers voted for each outcome. Each story sheet had boxes to be stamped. Each stamp equaled one vote, and participants received one stamp for losing a brawl, two for completing the activity, and two for winning. The decision was decided by a majority at each individual Toys 'R' Us, and whatever outcome won across all of the Toys 'R' Us in the United States determined the progression of the included story's plot and what the next Promo Card would be in the next event.

The dates for the event were:

The promo cards were:

On Day 5, Brawlers had the choice to choose to see an "All-New Dragonoid" or an "All-New Evil Bakugan", both from Bakugan: Mechtanium Surge. The new season 4 Bakugan was Titanium Dragonoid. The picture and video of Titanium Dragonoid were shown online. On the final league event day, players received a certificate of achievement for participation.

For more information about the story, see Trapped in Interspace: A Bakugan Adventure.

The story for the event was conducted over the five sessions, with all but the last supposedly impacting the direction of the story for the next week, though it is written in such a way that either option could potentially lead to the same outcome for most stories. The story itself details Dan Kuso and Shun Kazami rescuing Marucho Marukura from Emperor Barodius in Bakugan Interspace.

For the Bakugan Battle League, Spin Master introduced the "Minion Force" as a way for fans to record the events of the Battle League and post them on the my.bakugan forums. Members signed a contract and were provided with a fan kit which contained assets to help in video or image production. The official BakuBlog had a six blog run that covered the submissions from the Minion Force.