Klaus von Hertzon (クラウス・フォン・ヘルゼン, Kurausu Fon Heruzen?) was the second-best Bakugan player in Bakugan Battle Brawlers after Masquerade, though he eventually dropped to fourth place at the end of the season. He is an Aquos brawler with a close bond with his Guardian Bakugan, Sirenoid. Initially an antagonist due to Naga's brainwashing, he grows spiteful towards Alice Gehabich, Masquerade's unwitting host, for sending Sirenoid to the Doom Dimension after Naga's hold on him was broken. Nevertheless, he continues to aid the Battle Brawlers in their efforts to stop Naga.

He returns as a supporting character in the second arc of Bakugan Battle Brawlers: New Vestroia, briefly assisting Ace Grit in a brawl against Mylene Farrow and sending Chan Lee to back up Alice when he suspected the Vexos would go after her. Klaus also makes an appearance in the Bakugan: Battle Brawlers video game.

He collects Bakugan and has their open forms on a wall in his house in Germany, but he also collects other things such as suits of armor.

His attribute is Aquos and his Guardian Bakugan is Aquos Sirenoid, who he shares a bond with. He was Marucho's rival because he sent Preyas to the Doom Dimension in their first battle. After joining Masquerade's Top Ranked Brawlers team, he fights Dan, Runo, and Marucho alongside his teammates, Julio and Chan Lee, where he showed that he obtained Preyas from the Doom Dimension. He over used Preyas to make Marucho upset, eventually losing him to Marucho due to Runo's Ability Card, Pure Light. After that he decides to use a Mind Ghost to send Preyas back to the Doom Dimension, however Marucho is able to save him using the Dive Mirage Ability. Thus, he loses his Griffon to the Doom Dimension. They lose when Marucho activates the Fire, Water, Light Triple Node and Runo's Cut-in-Saber Ability Card, making Drago evolve. When he brawls Masquerade, he doesn't want to risk his Sirenoid. But when he activates an ability, she defies his orders and Dual Hydranoid sends her to the Doom Dimension. 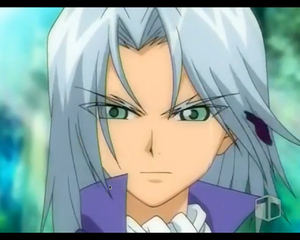 He then fights against Alice Gehabich, loaning her his Bakugan since she had none, partly for revenge, partly to teach her a lesson, although Sirenoid wanted nothing but revenge, calling her a brat and a coward. Alice didn't transform into Masquerade, who could easily have defeat Klaus, and he manages to defeat Alice's Darkus Centipoid with Sirenoid's Forcing Wave.

Klaus stalls both Druman and Hairadee with Sirenoid to help the Battle Brawlers when they were stuck in Vestroia. He also helps Alice and Christopher battle against Rabeeder, giving Christopher helpful tips on how to help him defeat her in a combo. Rabeeder also flirted with him a little bit, but he was too mad to focus on that. He and Christopher nearly won but lost instead when Rabeeder used her "Terra Crunch" Ability Card.

The brawlers then notice that he is worried about Alice and, laughing, ask why. Klaus shakes off the remark with a simple "I am a gentleman." 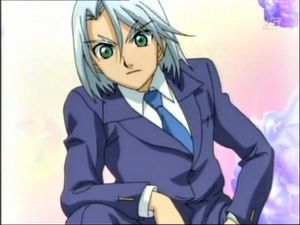 Klaus returns in Saved By the Siren. It was revealed that he helped Dr. Michael Gehabich in improving his teleportation device. Once it was successful, Klaus reunited with Sirenoid and eventually set up a real estate business in Vestal, whose apartments Ace was interested in for Baron.

He comes to the aid of Ace and Midnight Percival during their battle against Mylene Farrow. Both of them managed to fend Mylene off, with Klaus casually remarking that she was very beautiful, as usual. He then proceeds to annoy Ace by continuously calling Ace "Boy". When Baron catches up, Klaus helps them in warning Dan about the Vexos targeting the Attribute Energies.

In Shadow Attack, it was revealed that he sent Chan Lee to check on Alice. He then sent them back to Earth after the Dimension Transporter was destroyed and later on sent Maron to Earth to visit Baron.

In Spectra Rises, he invites the Bakugan Battle Brawlers Resistance to his home. When he reached downstairs, he came closer to Mira and kissed Mira's hand, a traditional gesture of courtesy. When he kissed Mira, Ace said "Heeeey! Dude!" in a tone of jealousy.

In Brontes' Betrayal, he helps the Brawlers escape as Spectra teleports into his castle and searches for them, only to find Klaus alone. Though Klaus tries to reason with him, Spectra looses his patience and leaves.

In Samurai Showdown, he asks the Brawlers about the situation and tells Baron and his sister, Maron Leltoy, was worried about him and traveled to Earth.

In Phantom Data Attack, he congratulates the Brawlers after Drago destroyed the B.T System and also informs them that the Vexos had escaped to another dimension after their defeat. He and Sirenoid stayed on Vestal in case they appeared again and because of his business reunions. This marks his final appearance in the series.

In Bakugan: Battle Brawlers, Klaus battles with Sirenoid in every one of his decks. Once he is hard mode, when you battle him at the park, he uses a deck similar to the one he used against Alice, containing Aquos Sirenoid and a Pyrus Siege. He also used a Haos Centipoid, as El Condor is not available in the game.