—Dual Hydranoid to Drago, Show Down

Dual Hydranoid now has two heads. The start of a saw on Hydranoid's chest has now become a fully developed metal saw that is now movable. In addition to his two heads, Dual Hydranoid also has two tails. The number of spines Hydranoid has increases and become sharper and longer. With this new evolution, he is now bipedal (stands on two legs). He can now grow a new head if one has been cut off.[1]

This Bakugan is extremely strong, and it steals energy from Bakugan sent to the Doom Dimension to become stronger. Only a cruel and heartless creature could do that! In battle, Hydranoid is hard to defeat, thanks to its tough outer skin and double heads. It lashes out at opponents with its long tail. Hydranoid may not be able to move fast, but it makes up for its lack of speed with the sheer force of its attacks.[3] 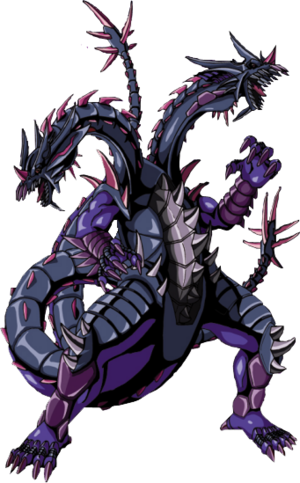 Masquerade's Darkus Hydranoid evolved when Masquerade battled his comrade's Bakugan. It's evolution was caused by the power from the Bakugan that were sent to the Doom Dimension. It evolved during the battle with Klaus and Sirenoid.[4]

He battled Delta Dragonoid and sent him to the Doom Dimension.[5]

He then battled the other Brawlers and defeated their Bakugan off-screen, though all of them lost on purpose in order to save Dan and Drago.[6]

He battled Wavern and lost.[7]

Dual Hydranoid evolved into Alpha Hydranoid at the end after defeating Exedra with Darkus Gazer Dual.[8]