Maxus Helios (アルティメット・ヘリオス, Arutimetto Heriosu?, Japanese version Ultimate Helios) is a deadly Bakugan that is made of seven Bakugan fused together.

Maxus Helios is formed by combining seven different Bakugan: Cyborg Helios, Subterra Scraper, Ventus Klawgor, Darkus Foxbat, Pyrus Fencer, Aquos Leefram, and Haos Spindle. It can battle as one mighty united force. Each Bakugan that composes Maxus Helios can also be used individually in battle. Even after Cyborg Helios is upgraded to its Mark 2 version, it can still form Maxus Helios. Maxus Helios has giant wings to blow away the competition, and huge legs to crush everything in his way. All of the Bakugan in this set are gray, with their attribute's colors as highlights. In Defenders of the Core, the pieces are called traps, even though they are normal balls. 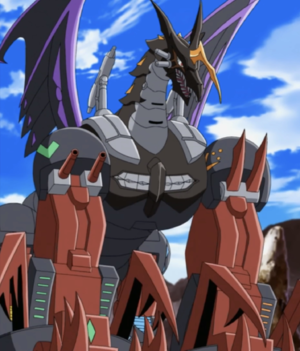 Maxus Helios appears in Ultimate Bakugan when Cyborg Helios combined with Scraper, Klawgor, Foxbat, Fencer, Leefram, and Spindle. He battles Maxus Dragonoid until Reunion but there was no victory between the two of them.

Defenders of the Core Ability Cards

In the Game, Maxus Helios was released in two variations. It was released in the normal BakuFrost and in the Toys"R"Us Special Color Variation. The BakuFrost Variation was a Mixture of a White Body with the Attribute Highlights. However the Toys"R"Us Variation had a Grey Body with the Attribute Highlights. Both had cost between twenty and seventy US Dollars. The Normal Maxus Helios parts could be bought individually but the Toys"R"Us Exclusive could only be bought in a Set. The Pyrus Cyborg Helios enclosed had the Grey Special Treatment and had 650 Gs.