Boriates (Japanese version Goriates (ゴリアテス, Goriatesu?)) is a samurai-like Mechanical Bakugan used by Volt Luster after the loss of his previous Bakugan Brontes. Possessing the unique Custom Battle Ability, While under the effects of the CBA, Boriates was figuratively granted near invulnerability, although the act of using it was seemingly considered cheating. It can combine with Dynamo to temporarily form Battle Arm Boriates.

The design of Boriates draws significantly from that of a samurai (likely to complement its brawler's own mindset), most prominently its face, which features the iconic open mouth and horns. Its equipment is a mixture of many different weapons and tools that are at the immediate disposal of Boriates. Its most recognized weapon is the Prometheus Cannon, a double-barrel cannon on its wrist that can be enhanced by Buster Mega Barrel (sprouts two more barrels for added firepower) or Olympus Cannon (splits the barrels apart for enhanced range and power). Its other weapons included a heavy double-sided axe on its opposing limb, a hidden firearm on its back, and an energy blade that is included with most Mechanical Bakugan. Though fairly average on its own, Boriates attained a higher status through its Custom Battle Ability, an enhancement that makes it virtually invincible and automatically intercepts all opponent abilities just as they are played. Through this ability, Boriates can effortlessly overwhelm its competition. Even after the Battle Boriates doesn't return to ball form.

After Mylene Farrow disposed of Brontes and her own Bakugan Elico, Volt received a newly-built Boriates at an unspecified time between the two arcs of Bakugan: New Vestroia.

Boriates appears physically in Brontes' Betrayal, fittingly under the usage of Volt for the first time on-screen. Its battle was with Gus Grav, using a newly evolved Alto Brontes, who had been seemingly brainwashed by a Forbidden Ability Card. Boriates was forced to hold back for the majority of the brawl, which meant it could not display most of its brute force and instead resorted to most of its lesser abilities. As a result, it suffered a crippling defeat in both rounds without attaining any victories (barring its successful "win" against Hexados).

In Samurai Showdown, Boriates faces Ingram and, later in a second round, Nemus. Despite being severely outnumbered (Boriates only had Dynamo and later Hexstar as supports; Nemus and Ingram had their respective Bakugan Traps as well as Shadow Wing) Boriates held its own in a close first round and won with less than a 100 G advantage over Ingram and Hylash. After an attempt to use the same strategy again, Baron and Nemus join the battle and turn the odds back into their favor, successfully pulling out a victory in the second round. The final round sees the debut of Hexstar, whom Boriates rides in a final clash with Ingram and Nemus. This results in their defeat and failure to acquire the Ventus Attribute Energy.

In Ambush, Boriates battled Saint Nemus and Master Ingram alongside Macubass, in an apparent grudge match (though with aid this time). Due to the Vexos Trap Field's advantage of continuously replenishing the energy and G-Power of all Mechanical Bakugan, the brawl is finished in two quick rounds and Boriates makes up for its previous failure by directly defeating Ingram and taking his Attribute Energy.

In Volt's Revolt, Boriates is used in its final physical appearance after Volt is discovered leaving the Vexos by Hydron. The result is a brawl with Dryoid, which Boriates wins in a close first round. Growing tiresome of Hydron's antics, Volt activates the Custom Battle Ability to enhance Boriates in such a way that it becomes virtually unstoppable. Hydron panics and activates a sequence of Dryoid's abilities, but each are ultimately trounced, forcing him to fall back on his Mar Shield ability to defend his Bakugan. Volt capitalizes and finishes the brawl with a powerful Olympus Cannon. He then reveals the secondary effect of the Custom Battle Ability: that his Bakugan does not return to ball form. Despite initially ordering Boriates to crush Hydron beneath its fist, Volt quickly decides against it and returns Boriates to its ball form, before subsequently falling victim to a Death Bomb.

As of Final Fury, Boriates is the only Vexos Mechanical Bakugan whose fate is left undetermined. 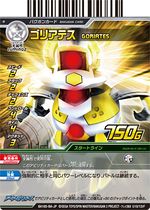 Boriates, like most new Bakugan in the second arc of New Vestroia, has not been released as a product and likely never will be. It should be noted however that it is shown on three Ability Cards that appear in Bakugan Arcade Battlers.