Master Ingram (マスター・イングラム, Masutā Inguramu?) is Shun Kazami's Guardian Bakugan in Bakugan Battle Brawlers: New Vestroia. He is the evolution of Ingram, having evolved after the Ventus attribute energy was given to him by Oberus. Though he returns to New Vestroia after the season's end, he makes a brief cameo in Bakugan: Mechtanium Surge

After evolving, Master Ingram resembles an armored version of his previous stage. The unnatural evolution caused by the Ventus Energy has given Ingram the appearance which is best described as a cross between an eagle and a ninja warrior. His overall appearance remains distinctly the same except the now in this new form he dons a black overcoat with yellow arches and circles. Aside from that his three pairs of wings from his previous stage have been replaced with a scarf-like cape which transforms into a single pair of wings during flight. He has also shown to have golden-trimmed black shinguards on his legs as well as gauntlets of the same color on each of his forearms which conceal two retractable talon-like blades used to slash his opponents.

He has the ability to combine with Shadow Wing in order to form Ninjitsu Master Ingram. In this form, he is shown to have little-to-no change when it comes to appearance and aside from that the only factors that have been changed is that Shadow Wing transforms into two pairs of green-trimmed, white wings and attaches to Master Ingram's back and the cape transforms into a more wing-like version of itself.

Master Ingram first appeared in Six Degrees of Destruction, when the Legendary Soldiers of Vestroia gave the Resistance's Bakugan their Attribute Energies. 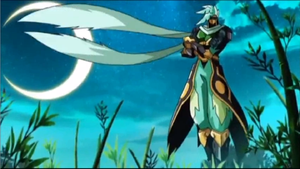 In The Day New Vestroia Stood Still, Ingram heads off to New Vestroia with Shun. There, he faced Lync Volan's new Mechanical Bakugan Aluze when he and Shun went to check on New Vestroia. When he was losing due to his inability to accept himself causing his powers to spiral out of control, Storm Skyress told him not to battle and insisted that Shun use her instead. As she, too, struggles, Ingram refuses to stand by and watch her suffer, embracing his powers and combining with Shadow Wing to make Ninjitsu Master Ingram. Following the battle, Skyress leaves Ingram as her successor as Shun's guardian and wishes the two of them luck.

In Samurai Showdown, back on Earth, Master Ingram and Shun teamed up with Baron Leltoy, who already lost the Haos Energy, to fight Volt Luster and his new Guardian Bakugan, Boriates. Together, they won and kept the Ventus Energy safe. However, this victory is short-lived, as the two team up together against to fight against Macubass and Boriates in Ambush. Due to the Vexos Motherpalace having a trap field that prevented Mechanical Bakugan from losing, they eventually lose and the Ventus Energy is taken. After Drago destroyed the Bakugan Termination System, Master Ingram helps Drago and the others depart from New Vestroia.

In Spectra's Last Stand, when Spectra returns for yet another rematch, he encourages Drago along with Minx Elfin, Knight Percival, Magma Wilda, and Saint Nemus.

In All for One, with the Alternative Weapon System complete, Master Ingram fights with the Brawlers and Shun's other Bakugan Hylash and Shadow Wing to battle the Alternative. When Hylash was blasted Ingram was in horror.

In Final Fury, he was blasted by the alternative and it looked like it hurt but then he says it doesn’t matter. Later he and the others fought Snapzoid, Lumitroid, Clawsaurus, and Farakspin in a place that looked like Bakugan Interspace. Later along with Helix Dragonoid, Saint Nemus, and Midnight Percival, they finally destroy the Alternative.

Sometime after the battle and before Bakugan Interspace was repaired, Ingram returned to New Vestroia.

In Blast From the Past, he was seen with the army of Bakugan trying to protect New Vestroia. He fought alongside Storm Skyress and Taylean, and perished along with them and the rest of the Bakugan at the hands of Mechtavius Destroyer. However, the Brawlers used the Current of Time to go back and destroy Mechtavius Destroyer before he was killed, and now he is either living peacefully on New Vestroia or has reunited with Shun.

Ability Cards (Defenders of the Core)

Master Ingram was released in Japan on October 8, 2010.