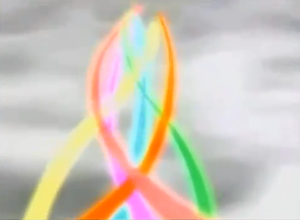 The Attribute Energies being transferred to their new owners

The Attribute Energies were first mentioned in Six Degrees of Destruction, and in the first season before New Vestroia.

Zenoheld needed the energies from the Legendary Soldiers to power the Bakugan Termination System that Professor Clay designed to destroy all Bakugan, mostly because of Zenoheld's hatred toward the Bakugan, due to their overthrow of Vestal occupation via the Bakugan Battle Brawlers Resistance and their allies. Zenoheld used his Mechanical Bakugan Farbros, functioning at 90% only, and defeated all six warriors; however, they teleported away before he could obtain their powers. Drago, Ingram, Elfin, and Wilda started to glow with energy, this probably happened with Percival and Nemus also. Then Dan, Shun, Marucho, and Mira fell down (Once again, this happened with Ace and Baron too). Then all members of the Resistance, and their Bakugan in Bakugan form appeared in a black, desolate place with thin fog (possibly the Doom Dimension). Then the soldiers appeared and gave the other Bakugan their Attribute Energies. (It is unknown why the Ancients trusted Ace, Baron, and Mira, and not Runo, Julie, and Alice, as, with the exception of Apollonir meeting Mira and Baron, they had never met the Vestals. Whilst with the latter three had made pass tests to prove themselves worthy of becoming the New Attribute Soldiers. Perhaps from what Apollonir gathered on Mira and Baron, he presumed that they along with Ace were trustworthy as did the other warriors).

These energies gave origin to Cross Dragonoid, Magma Wilda, Saint Nemus, Knight Percival, Minx Elfin, and Master Ingram. However, they lost their powers and were transferred into the BT System. In Exodus, Cross Dragonoid absorbed all the Attribute Energies out of the BT System, fused them with his Perfect Core Energy into his body, evolved into Helix Dragonoid and destroyed the system.