(Redirected from Legendary Soldiers of Vestroia) 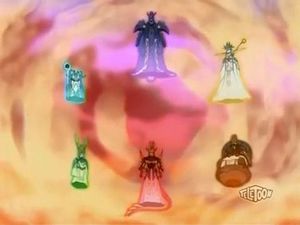 The Legendary Soldiers of Vestroia (also called the Ancient Warriors) are Bakugan who defeated an army of Gargonoids long ago. Since then, they have become legends, and preside over Vestroia from the Doom Dimension. There is one of each Attribute, and their combined power is 3000 Gs, as each of the Legendary Soldiers possesses a G-Power of 500.

In Bakugan Battle Brawlers: New Vestroia, the Soldiers reappear, conversing with Drago and giving him a body, transforming him into Neo Dragonoid, before sending him to the human world to get Dan. Then Vestroia starts to collapse without him and all they can do is wait and discuss. After Drago returns to New Vestroia, the Perfect Core becomes stable again. Later, they send Drago and the others to Earth. The Six Ancient Warriors then battled Zenoheld after he threatened to destroy the Bakugan if they did not come. Although they had the upper hand, the tide of the battle turned quickly after Zenoheld unleashed the Assail System. They were defeated, but before they could lose their attribute energies, they transferred their power to the Bakugan Resistance Bakugan, thus giving up their lives.

After Vestroia was saved, the Guardian Bakugan of the Battle Brawlers became the Six Fighting Bakugan who saved Vestroia. Due to their status, Prince Hydron wanted to make a collection of them and had five of the six, his exception being Drago.