Storm Skyress evolved from Skyress when Shun realized he could not live alone and needed his friends to help him. She is a larger, stronger version of Skyress with a very large wingspan and a blade-tipped tail.

When Skyress evolves into Storm Skyress, she becomes bigger, stronger, and even more powerful.

When Skyress evolves, she becomes larger and stronger. Storm Skyress has wings that span the battlefield. One of her long tail feathers is tipped with a sharp, curved blade.

Like Skyress, Storm Skyress fights for what's right. Storm Skyress was captured by the Vexos and later freed. She decided to stay in New Vestroia to watch over it and keep it safe. 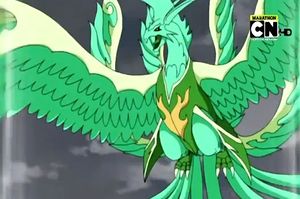 In the anime, Skyress evolved when Shun realizes that he can't go on living alone and that he needs his friends to help him. Shun lets a tear fall on Skyress's old Ability Card and it changed along with Skyress. When she evolved, Skyress turns into a much stronger and bigger version with 450 Gs. The Ability Card changes into Destruction Meteor Storm, which increases her G-Power by 100. With this newfound strength Storm Skyress and Shun were able to defeat the Ventus legendary soldier of Vestroia, Oberus. After that, Shun and Storm Skyress are the last to battle Dan to help Drago evolve. After a very close battle, Dan won and Drago evolved. 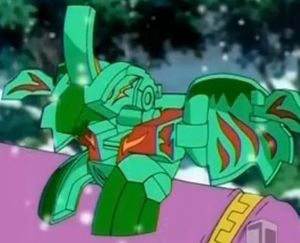 Storm Skyress is captured and turned to bronze statue from episodes 1 to 25. Skyress is freed along with the other New Legendary Soldiers of Vestroia. From what is implied in Drago's statement of the Six Fighting Bakugan who were captured, she was the third to be captured after Preyas and Hammer Gorem.

However, Storm Skyress did not want to come back to Earth with Shun, wanting to stay in New Vestroia to watch over it, feeling Shun would be safe in Ingram's hands.

Skyress steps in for Ingram during his battle with Lync, saying that he has no courage and his unworthy of the Ventus Attribute Energy, but after being put into a corner by Lync's new Aluze, Ingram forced himself to quash his uncertainty and embrace his evolution, and with this, they defeated Lync, and she flies away, leaving Ingram as her successor. She might have been one of the Bakugan evacuating New Vestroia in episode 42 or stayed behind.

In Blast From the Past, she was seen with an army of Bakugan trying to protect New Vestroia from Mechtavius Destroyer. She was fighting alongside Master Ingram and Taylean but ended up being destroyed with the both of them.

Because the Brawlers used the Current of Time to go back before Mechtavius Destroyer killed her, she is now most likely living peacfully on New Vestroia.