Pearl Bakugan are Bakugan that at the beginning of battle can either choose to gain their regular Gate Attribute Bonus or a highlighted one. They have pearl white as their main color and outlined with their original Attribute body color. Pearl Bakugan were first found in BakuTins. Besides the regular one, there are two more types of Pearl Bakugan which function with no differences, namely BakuFrost and Crimson and Pearl. During gameplay, these Bakugan have the option of taking the highlighted Gate bonus instead of their normal Gate Attribute bonus. 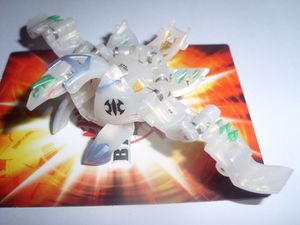 Frost Bakugan are Pearl Bakugan with glittered and more yellowish white body compared with the usual one. They also have silver highlights instead of highlights in their Attribute color, however, sometimes a small part of highlight in regular secondary color is kept. They were only released in B3 series.

All Crimson and Pearl Bakugan, regardless of their printed attribute in the game, will appear as Pyrus.