The Serpenoid squeezes the life out of its enemies. This Bakugan’s attack is extremely fast but the suffering it inflicts is slow and methodical. Their power grows as the life of their enemies is slowly sucked away, leaving them with nothing. The Serpenoid slithers low to the ground but is quick to rise up and Battle other Bakugans.[1]

Serpenoid is a slithering monster that can wrap itself around a foe squeezing the life out of its opponents. Its attack is extremely fast, but the suffering it inflicts is slow and methodical. Its power grows as the life of its enemies is slowly sucked away, leaving them with nothing.[2]

The slow squeeze is Serpenoid's method of choice to subdue its enemies. The snakelike Bakugan wraps itself around a foe and slowly and painfully squeezes. Serpenoid will drain energy as it does this, making itself stronger while sucking all of its enemy's power. You'll often see Serpenoid slithering on the ground, but watch out. It can spring up and attack without a moment's notice.[3]

This slithering serpent moves so quickly, its foes don't see it coming. It tightly wraps it body around its enemy and then slowly, slowly drains its power.[4] 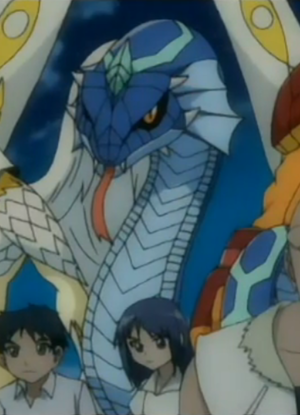 In the Bakugan anime, Serpenoid appears in the form of a large snake. With its winding body, it is commonly known to attack its opponents by coiling itself around them and draining them with its stinger until there's nothing left of the enemy.

Dan Kuso used a Pyrus Serpenoid in many episodes. Its was the first Bakugan he used in the series. Unfortunately, Dan's Serpenoid was sent to the Doom Dimension, but it was returned after the gang made it back from the World of Tests. It was later seen as one of Dan's Bakugan going home to Vestroia. A group of Pyrus Serpenoids fought for Naga. Several Aquos ones and a Subterra one was seen fighting Naga's forces. Takashi had a Pyrus Serpenoid as his Guardian Bakugan

Runo had a Haos Serpenoid named "Snakie". Hers, too, was sent to the Doom Dimension when she and Dan battled against Masquerade's minions, Kenta and Kenji in A Combination Battle. However, "Snakie" was returned.

Serpenoid opens with a head popping up and a tail going downward. The tip of the tail touches the bottom of the head when closed. When opened, a small part of the tail detaches itself, creating an extension of the tail. It was released in all Attributes. In Japan, its Subterra version in BCV-02 comes with 330 Gs or 420 Gs. A Darkus Serpenoid has 400 Gs.

Serpenoid is one of the three Bakugan first introduced in the first video game, alongside Saurus and Juggernoid. Its base G Power is 150 Gs in the Bakugan Store, making it the weakest Bakugan playable. Serpenoids are available in every attribute.