Julio Santana (Japanese version: Julio (ジュリオ, Jurio?)) is a character in Bakugan Battle Brawlers. He is the fourth-ranked Bakugan brawler and best Haos brawler in the world at the start of the series. Along with many of the other top brawlers, he was brainwashed into becoming Naga's servant. As a result, he fights against the Battle Brawlers a few times before being freed, after which he aids the Brawlers in their quest to defeat Naga.

His Guardian Bakugan is Haos Tentaclear.

Julio is a Haos battler and his Guardian Bakugan is Haos Tentaclear. Julio was the fourth ranked Bakugan player until Masquerade defeated him. He is presumed to live somewhere in Europe. He is also shown to have a strong rivalry with Runo for being the best Haos brawler. He also sometimes gets called "Q-Ball" by Runo. 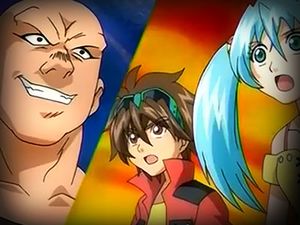 Julio, along with other Top Brawlers in the world comes to a "party" created by Masquerade, it is there where he is sent to the Silent Core and put under the control of Naga. When Julio is under the control of Naga, he fights against Runo and Dan, and ends up losing although he sends four of their Bakugan to the Doom Dimension. After that defeat, he fights Dan, Runo and Marucho in one final battle alongside Chan Lee and Klaus von Hertzon, but loses again and is freed from Naga's control. Julio is next seen when Masquerade defeats him and sends Tentaclear to the Doom Dimension.

He chooses to stall Tricloid when Naga's minions invade Earth. He reappears to help the Brawlers fight Naga's forces when he battles Hairadee alongside Komba and Shun.

In Duel in the Dunes, Julio makes a cameo in the group picture taken back in Season 1 shown by Dan.