Infinity Dragonoid (インフィニティ・ドラゴノイド, Infiniti Doragonoido?) is the third and the final evolution of Dragonoid in Bakugan Battle Brawlers.

Infinity Dragonoid can see through walls, and his three tails can attack from any angle.[1] 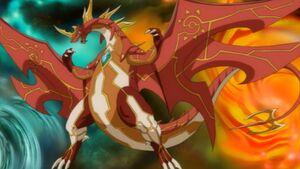 Ultimate Dragonoid uses the power of the Infinity Core that Wavern gave him to defeat Naga.[2]

After he absorbed both cores, Drago became complete by evolving into Perfect Dragonoid. After this, he said farewell to Dan and opens up a Dimension Tunnel to the core of Vestroia. He then returned both of the cores, creating New Vestroia and becoming the Perfect Core.

(Note: he does not appear physically, only as the Perfect Core) When the Vestals invaded New Vestroia and captured the Bakugan, he was helpless to do anything, so the Legendary Soldiers of Vestroia appeared and gave him a new body, downgrading him to Neo Dragonoid. 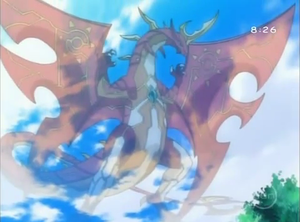 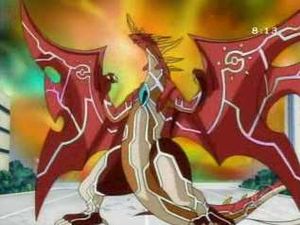