Zoompha is a motorcycle-like Bakugan Mobile Assault, that was released in the Bakugan: Mechtanium Surge line. It's Titanium Dragonoid's and Taylean's Mobile Assault. Its move in Bakugan Dimensions is Boost Rush.

Zoompha transforms into a motorcycle-like assault vehicle. It's speed and agility provide exceptional maneuverability within battle. 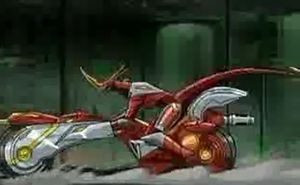 Two Zoomphas made their first appearance in Battle Lines, where they were used by Titanium Dragonoid and Taylean to travel through Gundalia. Both were destroyed by a Pyrus Iron Dragonoid.