Chris (クリス, Kurisu?) is a character that appears in Bakugan: Mechtanium Surge. Chris was part of Team Sellon and then an unofficial member of Battle Brawlers. Her Guardian Bakugan is Darkus Clawsaurus.

Chris made brief appearances along with Sellon and Soon from Interspace Showdown to Disconnect. She seems to have a little girl type of personality.

She made her first battle appearance in Fall From Grace when she was asked by Sellon to be her partner in a tag battle against Dan and Shun. She fought for most of the battle and was beaten quickly. She also seems to have some "inner anger" in her as shown by her change in personality as well as Sellon's comments.

In A Royale Pain, she and Sellon watch Soon battle in the Battle Royale.

In Mind Search, she and Soon battled Shun in the Capture the Flag challenge but they lost to him.

In True Colours, she and Soon survived the Chaos Bakugan's second raid. They both found out Sellon was working for Mag Mel and was just using them.

In Dangerous Beauty, she along with Soon find Sellon in bad condition and bring her to the brawlers asking for help. They later realized she tricked them into bringing her to Dan to get the Key. It is revealed that she is now a Darkus Battler due to her Darkus Clawsaurus. 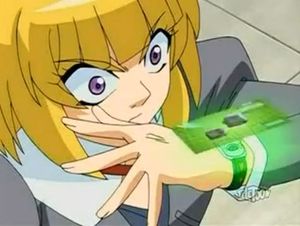 In Behind the Mask, she is with Soon, having lost her confidence and reason to survive, trying to get to the main base. Noah and his comrades buy them time for them to escape. Shun gave her and Soon the confidence to fight back as he reminded them of the grace of battling that Sellon installed into them, and they considered Shun their new light. They would then use their Bakugan to protect Dan and help defeat the remaining chaos Bakugan.

In Interspace Armageddon, she and the rest of the brawlers trapped in Interspace battle the chaos Bakugan and she leaves with Soon and Marucho.

In Dark Moon, she helps battle the Chaos Bakugan while the other brawlers focused on defeating the Mechtogan and Mechtogan Titans. Soon and Chris have apparently made Shun their leader, replacing Sellon.

In The Final Takedown, while fighting against Mechtogan Titans, she and Chris heard Sellon's voice and run towards it. Later, they reunite with the Brawlers and Team Anubias after Dan defeats Mag Mel.