An Heir To Spare

With Bakugan Interspace beginning to collapse on itself, Mira and Spectra attempt to save Mylene and Shadow, despite their wishes to die rather than to face dishonor. Before Mylene can change her mind however, she and Shadow fall into the Death Bomb's portal, while the Clay siblings, with Marucho's help, are extracted from Bakugan Interspace safely. Meanwhile, King Zenoheld learns of the mission's failure and gets angry about their loss as well as the Resistance obtaining the Alternative data, that his son Hydron failed to reclaim, who he tortures as a result. Later that night, Hydron has a dream in which Volt and Lync appear to him, and tell him to take down his father and take the throne for himself. Though frightened by his dream, it motivates him to fight against his father. Meanwhile, Zenoheld's Bakugan, Farbros has been repaired and synchronized with the Alternative System. Hearing this, Hydron challenges his father and Professor Clay transports them to the arena. Although, Hydron quickly gains the upper hand with Dryoid, he is no match for Assail Farbros. He loses and Zenoheld admits that they were never meant to be father and son and has Hydron imprisoned. While in his cell, Volt and Lync reappear telling him to overthrow King Zenoheld. Hydron shouts out that he will defeat his father, while Gus, who was presumed to have been killed in Avenging Spectra, listens from another cell and smiles.

Zenoheld activates the ability Ice Burst to freeze Dryoid, but it is no use due to Dryoid being a Mechanical Bakugan.

Dryoid runs past Farbros slashing him and wiping it out.

Hydron wins this round.

Hydron activates the ability Accel Speed to dodge it.

Dryoid gets knocked out in the power wave. 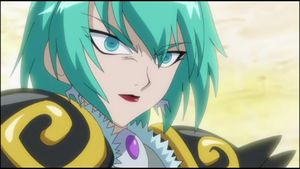