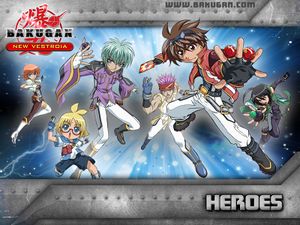 The core members of the Resistance

The Bakugan Battle Brawler Resistance (Japanese version Bakugan Defenders (爆丸ディフェンダー, Bakugan Difendā?)) is a group introduced in Bakugan Battle Brawlers: New Vestroia. It was established by Mira Fermin to free the Bakugan and New Vestroia from the Vestals who are forcefully inhabiting it. Their enemies are the Vexos, whom they frequently encounter.

The Resistance was formed by Mira Fermin after she saw Alpha Hydranoid speak after being tortured by her father and brother, and from that she learned that the Bakugan were actually living things and not toys as the Vestals had previously thought. After recruiting Baron and Ace over an unknown period of time, Dan and Marucho arrived in New Vestroia and Mira was able to add them to the Resistance's ranks.

After that, the Resistance found a clear goal, to destroy the Dimension Controllers that were restricting the Bakugan in to their ball forms. Over the course of this goal Shun eventually joined as well. After this goal was completed, the resistance split up, with Shun, Marucho, and Dan left to go back to Earth while Mira, Baron, and Ace stayed on New Vestroia just in case the Vexos came back to try anything.

However, this peace did not last long, as the Vexos re-emerged with the Bakugan Termination System which required six Attribute Energies to power up, which the previous holders, the Six Legendary Soldiers of Vestroia, entrusted in the bodies of the Resistance's Guardian Bakugan. In spite of the Resistance's best efforts, the Vexos eventually acquired all the Attribute Energies. With Spectra and Helios' assistance, however, Drago barely manages to stop the BT System.

Enraged by his plans' constant failures, Zenoheld decides to create the Alternative Weapon System to destroy both Vestal and Earth. However, the Vexos itself ended up fracturing in the process, slowly losing its members to internal conflict until Zenoheld had no allies remaining. With the final sacrifices of Professor Clay and Hydron, the Resistance was able to put a stop to Zenoheld and the Alternative. 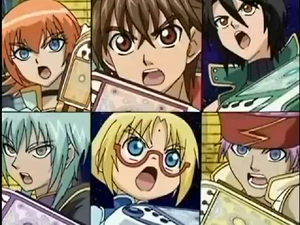 Mira is a Subterra brawler whose Guardian Bakugan is Subterra Magma Wilda. She is a Vestal girl who starts the Resistance to free the Bakugan after she sees a tortured Alpha Hydranoid speak out in pain. Her father is the developer of Mechanical Bakugan and her brother is the former leader of the Vexos, Spectra Phantom, yet she had severed her connections with both of them. Her original Bakugan was Thunder Wilda, which evolved into Magma Wilda, and her Bakugan Trap is Baliton.

Baron is a Haos brawler and Vestal boy who's Guardian Bakugan is Haos Mega Nemus, who would later evolve into Ancient Nemus, and his Trap is Haos Piercian. He is often considered the weakest of the Resistance, but he is still a very powerful brawler and has defeated most of the Vexos at least once, but he was the first person to lose his Attribute Energy which he lost to Prince Hydron. He comes from a big family and has six younger siblings.

Ace is a Darkus Vestal brawler whose Guardian Bakugan is Darkus Percival who he got from Mira after she persuaded him to join the Resistance, and who later evolves into Knight Percival. His Trap is Falcon Fly, which later evolves into Flash Falcon Fly. He has a crush on Mira and as such harbors some resentment towards Dan because he seems to grab her attention. He lost his Darkus energy in a tag brawl with Marucho against Lync and Shadow Prove, due to the effects of the trap set up for them.

Dan is a Pyrus brawler from Earth who's Guardian Bakugan is Pyrus Neo Dragonoid who evolved into Cross Dragonoid then later Helix Dragonoid, also known as Drago. He is hailed as the best brawler from Earth and came to New Vestroia at Drago's insistence due to the Vestals, with Marucho following. Mira was the first person he met on New Vestroia and she need to persuade the two of them much to join the resistance, later giving him his Bakugan Trap Scorpion. Mira has a crush on him, but he has a girlfriend back home (Runo, but he denies it when anyone notes it).

Marucho is a Aquos brawler whose Guardian Bakugan is Aquos Elfin, who later evolves into Minx Elfin. He is the only son of millionaires and is very smart, such as being able to program a signal jamming shield around his house. Although he wasn't supposed to join Dan and Drago when they went to New Vestroia, he followed them through the portal and joined the Resistance with Dan. His Trap is Tripod Epsilon. He now brawls with both Minx Elfin and Preyas, thought in Gundalian Invaders, it is unknown what happened to them, as they simply disappear from the plot.

Shun is a Ventus brawler who's Guardian Bakugan is Ventus Master Ingram, who evolved from his pre-evolved guardian Ingram, and his Trap is Hylash. He was trained as a ninja and as such is very agile both on land and in the air. He entered New Vestroia earlier then Dan and Marucho, with a portal opening on him when he was training and him falling into it. However, nobody knew he was there until later in the series when he was first seen saving Marucho from losing to Mylene. He later joined the Resistance after that incident. He brawled against Lync in New Vestroia in episode 30 for the Ventus energy, but due to Master Ingram accepting his powers, they were victorious. He later brawls against Volt in a tag battle with Baron, but with their combined powers, he and Baron won. He lost his Ventus energy in a tag brawl with Baron against Mylene and Volt, due to the effects of the trap set up for them.

Runo's attempt to follow Dan into New Vestroia goes awry when the portal incompletely processes her, trapping her in a non-corporeal form. Although the Resistance manages to get her back to Earth, the Vexos end up following them there as well.

During the Vexos' hunt for the Attribute Energies, she and Mira lose to Mylene and Lync and the Subterra energy was taken from Magma Wilda.

After the Resistance and Vexos alike come to Earth, Julie advises Mira in her duel against Gus as a champion Subterra brawler. With Julie's advice, Mira wins the brawl; under the terms of the duel, Spectra confirms that he is indeed her long-lost brother, Keith.

Later, Julie and Billy tag-team brawl against Ace. They lose, though they kept Ace on the ropes.

Alice was Masquerade's vessel and inherited his Darkus Alpha Hydranoid. She first appears to try and stop Julie and Runo from sending Runo to New Vestroia, but is unable to do so and Runo becomes trapped between the two worlds in a non-corporeal form.

When the Resistance and the Vexos alike arrive on Earth, Alice temporarily provides Lync with food and shelter when he ends up trapped on Earth. Later, she brawls against Shadow Prove alongside Chan Lee, but they both lose to his MAC Spider.

After Lync finds out about Zenoheld's plans to destroy Vestal and Earth alike, he takes blueprints of the

Originally a member of the Vexos, and the alias of Mira's brother Keith, he and his loyal adjutant Gus Grav defect at the end of the first arc to become independent agents. They clash once again with the Resistance, but after Spectra and Helios are defeated one final time by Dan and Drago, he joins the Resistance.

Originally a member of the Vexos, he and Spectra defect at the end of the first arc to become independent agents. They clash once again with the Resistance, but after seeing that Spectra has joined the Resistance, Gus joins too.

The fourth-ranked brawler on Earth and current head of a real estate company, Klaus is an Aquos brawler and his Guardian Bakugan is Sirenoid, whom he shares a deep bond with. He received an Aquos gauntlet presumably from Michael Gehabich, and assists Ace in fighting back Mylene in episode 29.

The fifth-ranked brawler on Earth, Chan Lee is a Pyrus brawler. She and her Guardian Bakugan, Fortress, make an appearance in episode 32 to aid Alice fight Shadow Prove after hearing about the Resistance's predicament from Klaus. However, the two are defeated in spite of their best efforts.

Julie's childhood friend and the eleventh-best brawler on Earth. He is a Subterra player and his Bakugan is Cycloid. He is first mentioned when Julie says he wants to be the greatest athlete in the world.

In episode 37, he joins the Resistance and battles Ace alongside Julie. When Billy goes to Marucho's house, he pulls out a Subterra Gauntlet; Shun later finds out while rewatching a security tape that this Gauntlet is what Mylene and Shadow used to follow him to Marucho's house.