He looks like a Power Ranger with white armor that covers most of its body. Due to its training, Aerogan has great skills and technique in battle. It has also amazing jumping skills due to its light armor, which allows it to jump as high as it wants. Because of that, its attacks have the element of surprise. It is very young and still has a lot to learn. Aerogan is hyperactive, funny, and sweet. 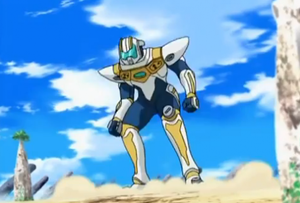 He made his debut when he was seen training in New Vestroia. After that, he somehow landed on Earth and ends up in Runo's juice. He explains that he wants a real brawl and a brawling partner. Later, he battles against Wiseman and Volkaos along with Runo, Dan, Dragonoid Destroyer, and Reptak. Afterwards, he goes back to New Vestroia and apologizes to his mistress, Blade Tigrerra, for running away without telling her.[1]

It has only been released with the Dragonoid Destroyer. Aquos Aerogan has 850 Gs.