A dangerous and notorious Bakugan, Tremblar is shielded by sharp defensive blades. When an enemy gets in close proximity, Tremblar immediately detonates his most powerful weapon: a stinging spike shield that cuts through even the toughest of monsters.

He first appeared in Evil Arrival, in the Doom Dimension.

He appeared again in Mysterious Bond, where he was seen in ball form with the Nonet Bakugan.

He appeared again in The Prodigal Bakugan in ball form next to Worton and Stronk.

He appeared in Gunz Blazing in ball form with the other Nonets. He later shows up alongside Wiseman and decided to challenge Drago, but Reptak returned the challenge instead. Tremblar gains the upper hand after he transformed into Combat Mode but was later defeated by the counterattack of Dragonoid Destroyer and Reptak. 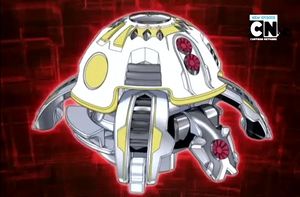 In The Eve of Extermination, he battled Jaakor, Skytruss, and Orbeum until his power was used to call upon the evil Mechtogan. He was defeated when Mechtavius Destroyer lost.

In Evil vs. Evil, he battled against Mechtavius Destroyer alongside the Nonets. After his pod is shot down and destroyed, he himself is killed and has his power absorbed by the fierce Destroyer.

In Blast From the Past, he appeared in a flashback showing his final moments before being defeated by Mechtavius Destroyer.