Order of the Castle Knights 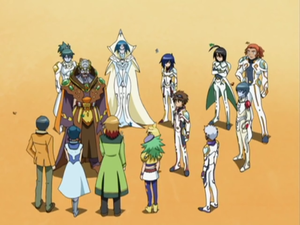 The members of the Castle Knights

The Order of the Castle Knights (キャッスルナイツ, Kyassuru Naitsu?, Japanese version Castle Knights) is an elite team of Brawlers that was founded in Neathia, whom the Battle Brawlers help to battle the Gundalian Twelve Orders.

Every unnamed Castle Knight wears a set of white armor, carries a staff, and wears a helmet with a visor that obscures their eyes. The Battle Brawlers' uniforms are significantly different, with all of them wearing a black (maroon in Fabia's case) body glove. Over this is a single-piece white uniform that covers the brawler from neck to toe. All six Brawlers also have cyan-and-gold armor on their shoulders and hips, while Shun's uniform features a waistcape. The uniform has a colored line running through it, depending what their Bakugan's Attribute is. Blue for Aquos, red for Pyrus, green for Ventus, orange for Subterra, yellow for Haos, and purple for Darkus. Depending on the individual, the pattern present on the uniform is different. Their BakuMeters are a diamond shape and look nothing like those seen on Earth, and are embedded into the left wrist area of the uniform. The BakuMeter is the color of what Attribute they use and has two buttons to generate Battle Gear or a Mobile Assault. It seems that most Castle Knights wear a helmet like Aranaut's, but Linus and Captain Elright do not, which may mean that they have a higher position than a regular Castle Knight. Rafe, despite being a relatively low-ranking member, however, does not wear one, oddly. When the Bakugan Battle Brawlers came to Neathia, they fought a large Gundalian army, after which they were appointed to the Order of the Castle Knights as its highest-ranking members (as suggested by Elright addressing Marucho as his superior). They then changed from their standard outfits to Castle Knight uniforms, which they then wore for the rest of the season, with the exception of Dan, Jake, Shun, and Marucho returning to their casual outfits at the very end of the season finale. It appears that they mostly use Haos and Pyrus Bakugan, and this is likely due to them being a Neathian organization.