Gunz has blond hair, and wears a gray, with red lining, jumpsuit. His eyes are violet. He thinks of himself as Dan's greatest opponent, and has a somewhat cocky personality. After donning Wiseman’s helmet, he wore a red jumpsuit and a matching helmet to reflect his inner rage. He takes off his helmet and returned to Gunz in episode 43.

Gunz is a hotheaded guy whose one goal is to defeat Dan Kuso and become the Bakugan champion.

He shared a bond with his Bakugan Guardian, Reptak.

After he became the new Wiseman, he and Betadron attempted to destroy Dan for turning Reptak against him for their supposedly betrayal. After he was convinced by his partner Reptak, he let his hatred toward Dan go.

For his first time seeing BakuFusion between Drago and Reptak, He is amazed and considered the Battle Brawlers are awesome. He amazed how he and Reptak created their own Mechtogan, Chromopod.

Gunz made his debut in Evil Arrival as a resident of Bakugan City. He was among the higher ranking battlers, second only to Dan, Marucho, and Shun. He hated the Battle Brawlers, especially Dan, and wished to humiliate Dan in front of his fans. Gunz first battled with Reptak and defeated Marucho. Before he could battle Dan, four Mechtogan appeared and defeated Reptak. He was then about to throw Reptak into battle, but before he could, he was blasted by Exostriker and disappeared into the resulting explosion.

He was mentioned in Wiseman Cometh, by his partner Reptak, who says he has gone missing. After the Battle Brawlers' first encounter with Wiseman, Reptak noted that Wiseman threw his Bakugan identically to Gunz. 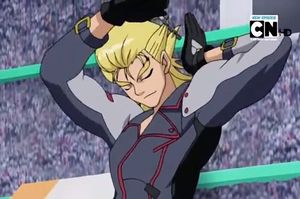 A flashback of Gunz is seen in Mysterious Bond at the end of the episode.

In Gunz Blazing, Gunz suddenly reappeared on a rainy day and was nearly hit by Kato's limo. He was brought back to the Battle Brawlers' HQ, where he reunited with Reptak. Wiseman then appeared in the city, so Dan, Marucho, and Shun went to investigate. However, it turned out to be a hologram. Dan realized that this meant that Runo would be Wiseman's next target. Gunz walked into the lab and offered to help Runo out, but she declined the offer. Declaring this to be the "wrong answer", Gunz knocked Runo and Kato unconscious with a shock baton, stealing several Battle Suits in the process by loading them from the computer onto his BakuMeter. Dan chased after him with Drago and Reptak, engaging in a battle against Tremblar. Gunz told Reptak that whatever friendship they had before was ancient history, leaving Reptak with Dan.

In Battle Suit Bash, it was revealed that Gunz is not Wiseman; Wiseman merely took on his appearance and mannerisms. Gunz was seen trapped in Wiseman's secret hideout. 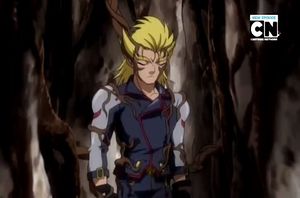 He appeared again in Enemy Infiltration, where he finally awakened when Wiseman transformed and killed Balista.

In Gunz Lives, it was revealed by Reptak that he battled Dan Kuso once before, but lost. He and Reptak continued training and got another chance, but Gunz blasted by the Mechtogan and somehow ended up in a cave. He tried to convince the Brawlers that he wasn't Wiseman but they didn't believe him due to Wiseman revealing his face to be Gunz prior to this. Gunz desperately tried to convince the Brawlers that he was not Wiseman, who then appeared behind him. Gunz was teleported back to the cave by Wiseman, who subsequently revealed that he is Coredegon. It was after that that they had realized that Gunz wasn’t lying.

In Evil Evolution, Gunz puts on Wiseman's helmet and becomes Wiseman 2. His outfit is red unlike Wiseman's, because of the amount of rage within him. Gunz and the remaining Nonets then confront Mechtavius Destroyer.

In Evil vs. Evil, Gunz and the Nonets fight Mechtavius Destroyer on their own while the Brawlers are in the Doom Dimension. He loses all the remaining Nonets except for Betadron. He then went to the Doom Dimension in order to battle Dan and Drago.

In Doom Dimension Throwdown, he and Betadron challenge Dan and Drago to a final battle. After a long and intense fight, he loses to them. After the battle Dan tries to convince him to turn back into Gunz, but he refuses until Reptak convinces him. He then takes of his mask, turning him back into Gunz.

In Blast From the Past, he, Reptak, Betadron and the other Brawlers tried to come back to the Volcano island, but then Worton saw a vision of Mechtavius Destroyer destroying Bakugan City and New Vestroia. Later, Worton sent him and the Brawlers to the past. Due to Betadron's and Worton's sacrifice, they were given the energy needed to go through the time warp and arrive to Volcano Island so they could stop Mechtavius Destroyer before he destroyed Bakugan City.

In Beginning of the End, he and the Brawlers battled against Mechtavius Destroyer. After Reptak returns to ball form, he considers giving Reptak to Dan due to his lack of knowledge about Bakugan, Battle Suits, Mechtogan and Mechtogan Destroyers, but Reptak says that he and Gunz are partners until the end. After this, he and Reptak created their new Mechtogan, Chromopod. They are surprised to see that they created him due to their true partnership, as well as Dragonoid Destroyer's remaining 10% power reserve.