Gate Cards, formerly Gateway Cards[citation needed], are the playing surface used for Bakugan game. The cards contain a magnetic plate in their middle which triggers the Bakugan rolled onto them to open ("Stand").

Gate Cards give bonus G-Power to based on their Attribute (Pyrus, Aquos, Subterra, Haos, Darkus or Ventus), with one Attribute getting a "highlight bonus".

Cards may be Common or Rare, and there are special cards only available in the Arena product.

Gold Gate Cards often give a Bakugan a G-Power bonus once a certain condition is filled. Many of these cards are Bakugan-specific, meaning that if you want them to work properly, you should at least stock one of the stated Bakugan on the Gate Card (the name of the Bakugan will usually be the name of the Gate Card).

These cards replace the Bakugan Character Cards from the original series.

Silver Gate Cards are a type of Gate Card framed in Silver. They are the most basic Gate Cards and only a few of them have text. When looking for these cards it is important not only to consider putting in a Gate Card that give you a high boost, but also not so great boosts for your opponent.

Copper Gate Cards, (sometimes called Bronze Gate Cards), are a type of Gate Card that you can only have one of in the game. These cards have a variety of different effects and they are very valuable in the game. Many of them are helpful to Bakugan with low G-Power but high G-Power Bakugan can make use of Copper cards as well. These cards can change the game for you and easily put you back in the game if your losing by maybe giving you an Ability Card or letting you win an easy round. Copper cards are very valuable in game so choose wisely. These cards replaced the Command Cards from the original series.

In Bakugan Dimensions, Gate Cards are special Moves that set special conditions over the field. They dispel any Gate Cards before it when played and usually last about as long as the typical defense. (Darkus Gates are an exception to this rule as they will only dispel non-Darkus Gate in play, rather than dispel all Gates period. This means you can have multiple Darkus Gates in play at once.) 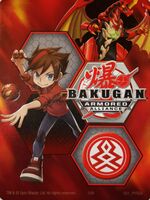 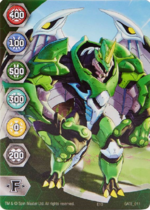 Gate Cards were originally omitted in the Reboot in favor of BakuCores. However, in the second season, Bakugan: Armored Alliance, the majority of products include a Gate Trainer, which is not used in the game and is instead used for practicing trick shots. Each Gate Trainer has artwork of one of the Awesome Brawlers on the back. The primary reason for the inclusion of the Gate Trainers is to prevent the actual cards from being bent or otherwise damaged in the packaging.

Midway through the season, the Gate Trainers were replaced with actual Gate Cards, which are used for the Gate Battling Game, a simpler version of the normal Toy Battling Game. Gate Cards no longer have names or effects, and simply feature the Faction bonuses and artwork as well as a colored boarder in a similar layout to the Legacy series. Some Gate Cards also have a either a Baku-Gear Symbol or a Faction Fusion Symbol in the lower left corner.