Reroll is a mechanic in the Bakugan Battle Planet Trading Card Game, and was introduced in the second card set, Bakugan Resurgence. Rerolling allows the player to reroll their Bakugan should they miss or choose to aim for a different BakuCore. 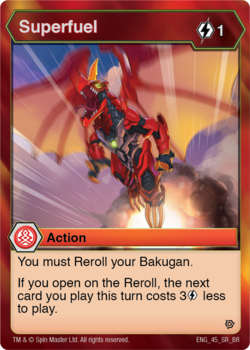 Superfuel, a card that requires the user to Reroll, but grants a bonus should they open on the Reroll.

From Secrets of the Geogan onwards, Bakugan that can re-roll once per turn have the icon

to indicate the ability to re-roll.

Some Action Cards have the effect of Reroll, but other cards such as Rip Tide and Second Strike require you to reroll rather than having the option to, though this typically has a second part to the effect. For example, Nature's Blessing is a 5 Energy cost Ventus Action Card that requires you to reroll your Bakugan, but if you open - your Bakugan gets +10

(This Bakugan's stats cannot be reduced) .

Although risky, a player could use an Action Card with the reroll effect to try to collect a different BakuCore, as this can be useful for Bakugan and Evolved Bakugan that have an effect that requires you to collect a certain BakuCore. One could, for example, use Quickfire or Solar Powered to their advantage and reroll Ventus Fangzor Ultra if they did not land on a

BakuCore which would give that Bakugan a +500

Cards with the Reroll effect[edit]