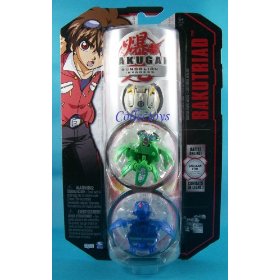 BakuTriad is the name for Starter Packs for Gundalian Invaders Bakugan. As original Starters, the BakuTriad packs include three Bakugan, Ability Cards and Gate Cards as well as a rulebook for playing the game. The rulebook for the BakuTriad has all the rules as the original rulebook had, just with a few extra ones, including the uses of Bakugan Battle Gear and Special Evolution Bakugan. If one of the Bakugan included in the pack usually has instructions (for example: Avior), the instructions will also be included in the package.

Typically, they will include two Gundalian Invaders Bakugan and a New Vestroia Bakugan. These Bakugan have a DNA Code included on them. Their G-Power is greater than their previous versions due to the fact that the G-Power standard has been increased. For example, an old Cosmic Ingram usually has a G-Power of 550 but now they can have 700 in the BakuTriad starter pack. Because they feature a DNA Code, they can be used in the upcoming Bakugan Dimensions game. BakuTriad packs do not include Bakugan Battle Gear or Super Assault Bakugan. In most cases, the Baku-Legacy Bakugan has 700+ Gs while the two Gundalian Invaders Bakugan have Gs in the 600's.

Usually, two of the three Bakugan are open while one is fully closed.