Turtonium is a tortoise-like Bakugan that appears in Bakugan Battle Planet. He is the third partner Bakugan of Wynton Styles.

Wise and strategic, this turtle-like Bakugan is a thinker and philosopher-warrior. He is an excellent strategist and acts as Wynton’s secret weapon in terms of planning battles and executing attacks. Not much of a fighter himself, Turtonium prefers to act as support, healing others and helping his friends succeed. 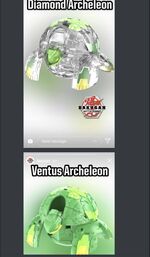