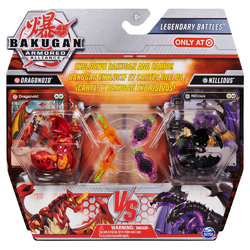 The Legendary Battles packs are combination packs that feature two Bakugan and their Baku-Gear, with the theme of the Bakugan competing, or "versus" the other. The packs contain special Promo versions of Ability Cards that are exclusive to the packs.