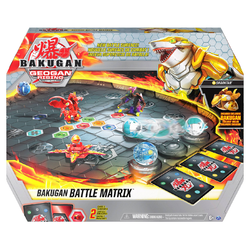 The Bakugan Battle Matrix is a product released during Bakugan: Geogan Rising, and later released in Bakugan: Evolutions in green colors as the Evo Battle Arena. Despite it being listed as such on the packaging, the Aurelus Sharktar that comes with the arena is not exclusive to it. This was later changed in its Evolutions release, with an exclusive figure, Aurelus Leonidas